Will Quidditch Make An Appearance At The London Olympics? 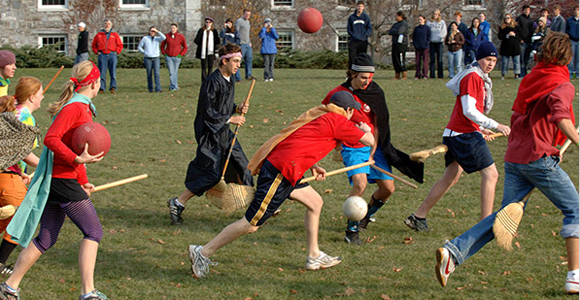 They may not fly on their broomsticks but Muggles have been holding regular Quidditch tournaments since 2005. Based on the game Harry Potter author J.K. Rowling created, Muggle Quidditch is as serious as any sport for its competitors and even culminates in a Quidditch World Cup each year. Now, commissioner of the International Quidditch Association, Alex Benepe, is arranging a match to take place at the 2012 London Olympics. Can you imagine how many Portkeys they’re going to need?

“Today it is my pleasure to lay out a road map for the future of the IQA and real-life quidditch,” wrote Benepe in his State of the League Address. “In case you’ve been locked up in Azkaban, 2011 was a big year for quidditch. The IQA just held its fifth annual World Cup in New York City. We’ve come a long way in the five years since a ragtag gaggle of freshmen first played real-life quidditch on a field at Middlebury College in Vermont.”

The event was the biggest the International Quidditch Association has ever seen with 1,600 players in attendance and 11,000 spectators attended on one day alone. “This encouraging number proves that quidditch has the ability to become an economically viable spectator sport,” he said. The next obvious step? The Olympic games of course!

I have no doubt this will happen for the simple fact that it would be taking place in London. American Harry Potter fans are already enthusiastic enough, get the Brits involved and it’s sure to grab attention.