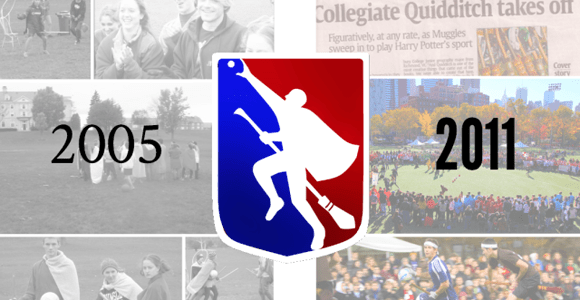 Remember how thrilling it was to read about the Quidditch World Cup in Harry Potter and the Goblet of Fire? Did you know that since 2005, Harry Potter fans have modified J. K. Rowling’s magic game  so that Muggles could enjoy it? Regular tournaments are held all over the US and Canada on a weekly basis but this weekend, 95 teams descend upon Randall’s Island in New York for a two-day tournament marking the end of the quidditch season. Get your Sonorus spells ready to cheer on your favorites!

Formerly, the annual event took place in Vermont but this is the second year the Quidditch World Cup will take place in New York, this time at Icahn Stadium on Randall’s Island. The International Quidditch Association, a non-profit organization, has put together the event which will include 450 games played over two days, with live music, entertainers, food and drink vendors and more.

Their press release states it is “the largest display of real-life quidditch ever, over 2,000 college athletes will seek to best each other on eleven fields of continuous play. One-hundred teams representing 27 US states and 5 nations will compete, arriving from schools as close as NYU, and as far away as the University of Vassa in Finland.”

Fox News calls it “a cross between the Superbowl and a Medieval Festival,” and I can tell you, muggle quidditch is serious business for these athletes.

The Quidditch World Cup is family friendly and open to the public. You can purchase tickets online or at the event for just $4.99.