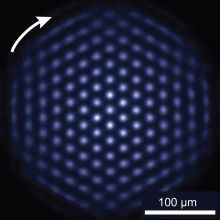 Quantum computing is a big deal. Unlike cramming more and more components closer together on chips, quantum computing will increase processing power by orders of magnitude. It would forever change the face of computing as we know it. Still not hitting home? How about this: Scientists have designed a 300 atom quantum-computing crystal so powerful that in order for a conventional computer to match it, that computer would have to be the size of the known universe. Yeah.

It sounds crazy, but if you know a little bit about quantum computing, it makes sense. The real beauty of quantum computing is its ability to scale. Unlike bits, which can only have one value at a time (0 or 1), qubits can have 2 values at any given time. Because of this, the power of a quantum computer scales exponentially as you add qubits, making it very easy to get to ludicrously high levels of computing power.

But before you go getting too excited, there are a few things to note. The crystal — the specifics of which were recently published in Nature — has been designed, but not actually built or put to use. And even if it were, we still have a way to go in understanding the fundamental basics of quantum computing. It was a big deal when IBM finally got up to 95% accuracy with quantum computers, and we probably should get to at least 99% before anyone starts building. That’s not to mention that the things crazy quantum computers are good at computing are things that are practically impossible to check any other way.

All said, we can stow this away in the folder marked “awesome things related to quantum computing that sound awesome and are awesome, but don’t directly impact the likelihood that I’ll be able to play with a quantum computer in the next 15 years or so.” Still, a breakthrough is a breakthrough, and it’s baffling to think what you could do with a computer that, in a way, is as powerful as the universe is large. Let’s just hope we can get one of those up, running, and comprehensible soon.