Impure Diamonds May Be Useful For Quantum Computing | The Mary Sue 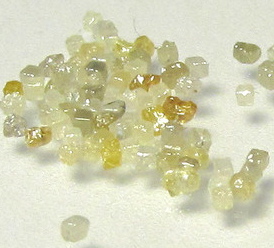 Quantum computing is a new and exciting field, emerging from the ability to utilize quantum mechanics to create computers that can perform complex operations on data. Scientists have been making progress developing quantum computers and they know what is required to make such a system. Though they have developed working systems, scientists still believe that no existing machine has reached the full potential of quantum computing.

The trend in quantum computing research is shifting away from proof-of-principle and focusing on trying to make a better way to control quantum bits (qubits) to perform operations. New research described in papers in Nature Physics by a team from the Center for Spintronics and Quantum Computation at the University of California, Santa Barbara and Physical Letters Review by a team from the Department of NanoBiophotonics at the Max Planck Institute for Biophysical Chemistry in Germany has found that impure diamonds may be an effective architecture for quantum computing.

What the papers really do is lay out blueprints for what is needed to achieve efficient quantum memory. A magnetic field is applied to split the qubit, the energy state of which is set with a laser pulse. The state can be manipulated with microwaves, and the magnetic field can then be increased to a new value so a radio frequency pulse can then push the state onto the nitrogen nucleus. Increasing the magnetic field further makes the stored state become isolated. In order to retrieve the qubit, the process is simply reversed.

Great! So, that means what? Well, for those among us with no background in quantum mechanics we’re going to have to look at things from an atomic level to figure out how qubits are made from impure diamonds. Basically, it is all about the atomic structure of the diamond’s molecules, and how they interact and can be manipulated. Diamonds are made of carbon, and in a carbon atom four of the electrons are looking to bond with another electron. This means that each carbon atom becomes attached to four other carbon atoms. In impure diamonds (yellow in color) there are also nitrogen atoms. Nitrogen has one extra electron, and because the molecule only wants three extra electrons this causes a gap in the crystal structure of the molecule and a spare electron.

The hard nature of diamonds restricts the motion of the nuclei, which in turn protects the spare electron. This gives the electron a defined set of energy levels. One thing that makes using diamonds for quantum computing so useful is that the energy levels can be controlled by applying microwave or laser light pulses. So what we have is a spare electron, whose energy levels are defined by the molecule’s structure. Additionally, this electron’s energy can be controlled by and read by microwaves and laser light pulses. But here we run into a problem.

The impure diamonds are difficult to come by because they need to be of good quality but still have the right number of impurities. There is a balance between wanting lots of nitrogen atoms so that you can have lots of qubits, but needing them to be far enough apart that they can be manipulated individually. Additionally, there isn’t a good way to transfer qubit states from the electron in the vacancy to the nearby nitrogen nucleus.

Using a strong laser, the researchers found they could choose a power level that turns off all the nitrogen vacancies but the one at the center. This way the researchers demonstrate that they can read and write (optically) to a single qubit, even though many were hit by the laser.

But the papers don’t stop there. In a follow-up experiment, the researchers show that sticking the qubit in this long lasting invisible state preserves its original state even in the presence of microwave pulses. This allows researchers to manipulate a single qubit without changing ones nearby, even in diamonds that are densely packed with nitrogen. What this process amounts to is making it easier to find useable diamonds.

Additionally, the nitrogen nucleus has long coherence times and great memory, but if the electron’s quantum state is transfered to the nucleus state by the method described above, a set of radio frequency pulses would be needed for the entire duration of of the storage time. However, the way the qubit is set up with its single ground state split by the magnetic field gets around this problem because the magnetic field also splits the nuclear spin states to make storage states. This is what makes the transfer time so long, but if you choose the field correctly the split between energy states will be identical, allowing a quantum state to be pushed from the electron state to the nucleus state and back again.

So in the end what does a lot of meddling with electrons in impure diamonds get us? The answer is a better way of designing quantum computing technology for enhanced control of qubits. While the technological explanations can get pretty complicated, having better quantum computers means a better way to process, store, and manipulate data — which is quite obviously beneficial.