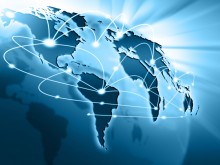 With amount of components we can cram on a chip slowly reaching its physical limit, quantum has become the next big thing that could revolutionize the computing world. IBM is even on the cusp of building actual quantum computer protoypes. But what good is any of that if we don’t have a quantum Internet? Fortunately, we do. A team of scientists at the Max Planck Institute of Quantum Optics have just established the first working quantum network.

As with most firsts, the network is quite primitive at the moment, and connects a mere two atomic nodes with 60 meters of fiber-optic cable. Since a quantum computer works with qubits, which can have values of 0, 1, or a quantum superposition of both, a quantum Internet would have to able to communicate in qubits. This prototype network accomplishes that by using photons to carry the information around.

The team has managed to rig up a laser to fire and hit the first networked atom in a way that the atom preserves its quantum state, but also produces a photon with that information plastered onto it. The photon then shoots off down the fiber optic cable delivering it to the second atom. Network achieved. On top of that, the researchers managed to get the two networked atoms to entangle, which means the network should be completely scalable to something along the lines of an Internet.

The project’s lead researcher, Dr. Stephan Ritter, had this to say:

Quantum computers will exponentially increase the power of computing as we know it, and now it looks like we might have a solid network to support them by the time they’re up in working order. The real question is, which of these technologies will reach a wide scale usability first. Bets, anyone?