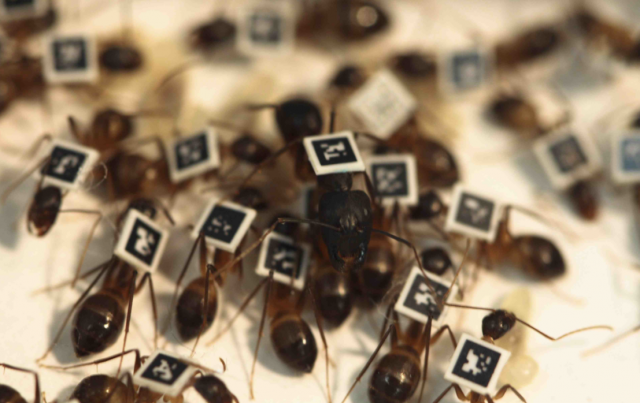 QR codes are generally something we think of as silly. Most people aren’t interested in scanning the code you put on your band’s flyer to get more information. It turns out they can actually serve interesting purposes for science, like tracking an entire colony of individually tagged ants to better understand their social structure.

A new paper published in Science showed that over the course of 41 days, a team of biologists at the University of Lausanne in Switzerland, tagged and studied a colony of more than 100 ants in a lab. The ants lived in flat, easily filmed and studied enclosures that were underneath overhead cameras. It was basically The Truman Show, but with ants.

During the study, the team gathered more than 2.4 billion readings with 9.4 million documented interactions between ants. That’s a lot of data, but we guess the numbers add up pretty quickly when you’re using a computer to track every ant’s location twice per second.

What they found was that at any given time about 40 percent of the worker ants took care of the queen and her new offspring. 30 percent of the ants were responsible for cleaning the colony, while the remaining 30 percent foraged for food.

What is interesting about the study is that it showed that ants don’t have the same job their whole lives. They commonly move from one duty to another with age, although that wasn’t always the case. The progression generally had the younger ants working as nurses, then they work as cleaners, and then when they’re older they work as foragers. The results weren’t quite so rigid, with examples of old nurses and young foragers being found.

Anna Dornhaur of the University of Arizona in Tucson called the paper, “a game-changer, in the size and detail of the data set that was collected.” She mentions that new methods of tracking animal behavior automatically have been developed, but that this is one of the first empirical studies to utilize them.