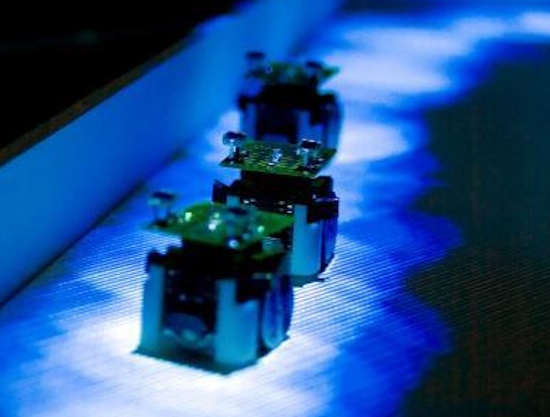 Researchers at the New Jersey Institute of Technology wanted to learn more about how ants moved and behaved in their colonies, so they did what anyone — well, anyone who worked at an Institute of Technology — would do: they built a robotic analog for the insects. The robots don’t look like real ants — they’re simple, boxy things about the size of a sugar cube that are powered by watch motors — but they behave the way ants do, moving randomly in a general direction or following the trails laid down for them by earlier ant explorers. As it happens, though, these two simple tactics allow the robots — and the ants they’re modeled after — to navigate complicated mazes.

Called Alices, the robots are programmed to act like ants do, moving in one general direction, but otherwise randomly. As they do so, they leave trails of light that other Alices can detect — a pair of light sensors on each robot mimic antenna on the real-life insects. These light trails are the robot equivalent of a pheromone trail. Using just random movement and the trails left by other robots, researchers found that the Alices were able to find the most direct route to a designated target and navigate large mazes with nothing but the most minimal programming.

One result of the research is that it shows ants don’t need complex cognitive processes to navigate the complex tunnel systems they call home — they can get around just fine being real dumb, thanks very much.

More practically, though, the technique could prove helpful in teaching new generations of swarming robots to adapt to their surroundings with minimal effort on the part of designers.