This NPR Bracket Might Be Nerdiest Alternative to NCAA Tournament 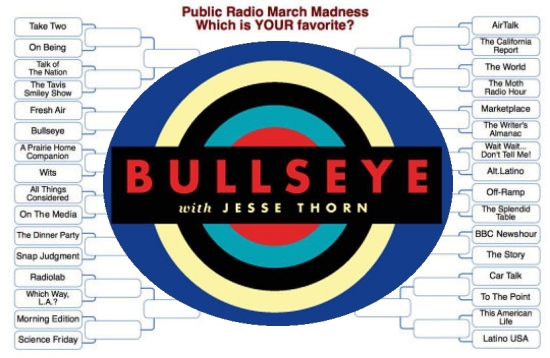 Today starts the NCAA March Madness tournament. Yawn. I don’t want to perpetuate the stereotype that geeks can’t also like sports, but man, do I hate March Madness.* The real action is in public radio feuds, and that’s why I’m pumped to see that 89.3 KPCC has 32 NPR shows going head-to-head in an NCAA style tournament bracket. The smart money (mine) is on Bullseye to take the whole thing against Car Talk in the finals.

It’s not uncommon around this time of year for people to try to cash in on March Madness by making a bracket for just about anything. It’s a competitive month for a lot of people, but this is the first time I can remember anyone making public radio shows go all Hunger Games on each other.

KPCC is hosting the voting for the tournament on their website, and the first round of voting is open from now until March 20th, at which point the herd will be narrowed down to the “public radio sweet 16.” That round goes until March 24th before eliminating eight teams for round 3, which will run between March 25th and March 31st. April 1st kicks off the Final Four with voting until April 4th, and championship voting will run from April 5th to April 9th before the winners are announced on the 10th.

I’ve never filled out an NCAA tournament bracket, but I sure filled out this one. Bullseye with Jesse Thorn is my favorite radio show because it is the greatest one since The Shadow, so I’m backing it to win in a big way. Here are all my other picks: 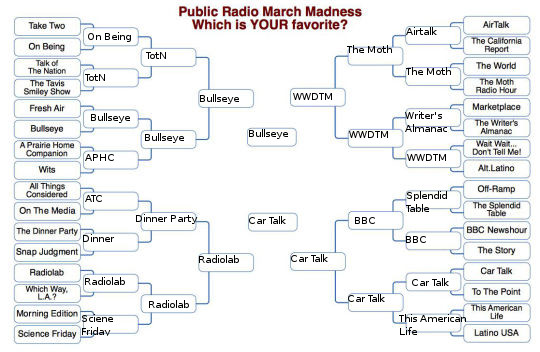 As Twitter user @cobyrne pointed out in response to Thorn’s tweet about the tournament, and how he’s a man of the people unlike Fresh Air host Terry Gross:

@jessethorn Pro Tip: you can vote as many times as you like

So if you have a favorite, you can expend all your energies voting for it repeatedly. Conversely, you can also put energy into smiting your enemies — if your enemies are public radio shows you don’t like.

I can’t be the only one excited for this thing. Who do you think will come out on top?

*My interest in the NCAA tournament hinges solely on whether or not my friend Dr. Brett Reed and his Lehigh Mountain Hawks make it in. They didn’t this year, so I find the whole thing boring. Go Hawks.

(via KPCC, image via KPCC and Maximum Fun)