Girl Says She Was Booted From Prom For Wearing That Most Scandalous of Attire: Pants 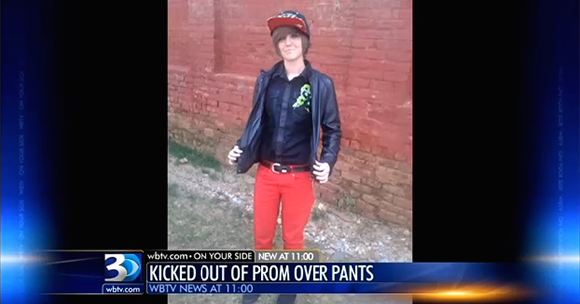 No, not pants! Anything but pants! *gasssssssp*

Shafer Rupard, a high school senior at Cherryville High School in North Carolina, rolled into her senior prom ready to have a boring, awkward time that she probably wouldn’t remember one year later, never mind ten. Or maybe I’m projecting. Anyway, it turns out something about a prom became memorable when she was kicked out of it after five minutes for wearing red skinny jeans.Via WBTV:

“The teacher tapped me on the shoulder and said she had a problem with what I was wearing,” said Rupard. “I thought it was because of the hat or the leather jacket and I was like well I’ll take those off and she was like no, it’s the pants.”

DUN DUN DUNNNNNN. Were the pants made of anthrax? Were they toxic pants?

Jeans aren’t the most formal attire, but it’s the prom, not the dang Oscars*; if someone wants to wear jeans, they should be able to wear jeans. And the school has no dress code for the prom, so the teacher who threw Rupard out wasn’t in the right even on a technical level. “It’s just the way [Rupard has] always been, and she wanted to feel comfortable in her own skin,” said her mother Shawn McQuaige. “We want to put out the message to all teenagers that you should be allowed to be yourself.”

But. But if teenagers are encouraged to be themselves, they might become well-adjusted adults who are comfortable with their appearance and can’t be manipulated into feeding billions upon billions of dollars into industries bent on upholding restrictive and unreasonable beauty standards.

*Whoever wears jeans to the Oscars get my eternal love and devotion, though.