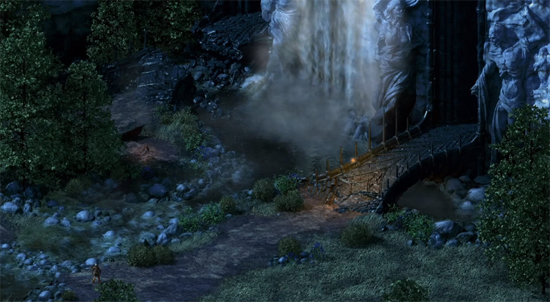 Project Eternity from Obsidian Entertainment, which is composed of a lot of folks that helped make Black Isle Studios the role-playing video game powerhouse that it once was, is about as close as we’re ever going to get to a new role-playing game using the Infinity Engine — the backbone of games like Baldur’s Gate and Icewind Dale. That’s more or less how the successful Kickstarter campaign was initially pitched, and now they’ve put out a video full of in-game footage that certainly seems to prove their claim.

We’d previously been made privy to certain aspects of the game, like exteriors and such that were still in progress, but their latest update shows off a whole slew of features that — if you’re familiar with the old Black Isle Studios games — might make your head spin.

Not only do they show off Eternity‘s day and night cycle, as well as moving in-game foliage, but they showcase their ability to dynamically alter the landscape of an area by, say, increasing the water level. Also, this is all happening based on 2D renders, not 3D. Yeah. It’s a little difficult to explain, but the video does an excellent job of showing rather than telling: