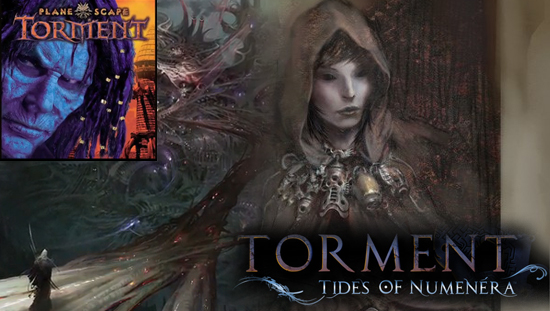 Rumors of some new incarnation of Planescape: Torment begat rumors of a sequel, then of some new incarnation once again. While the locked-up intellectual property — that is, the Planescape setting owned by Wizards of the Coast — used in the 1999 Black Isle Studios game of Torment prevented a true sequel, we’ve now got the next best thing, or maybe something better. The chatter and hype have finally given way to actuality: The Kickstarter for Torment: Tides of Numenera launched today and was fully funded in six hours. Developer inXile Entertainment is at the helm, and they’ve got a promising team waiting at the start line.

It’s only day 1 and they’ve already reached the funding they were looking for — $900,000. Stretch goals are pending.

It’s not just Torment: Tides of Numenera that came from such fan-based fundraising. The upcoming post-apocalyptic RPG Wasteland 2, also developed by inXile, had a successful Kickstarter ($2.9 million) about a year ago, and Numenera itself was funded in September. The new setting is the brainchild of game designer Monte Cook — who helped design Planescape back in the day. Numenera is a fantasy world but it’s the far distant future, so there should be just enough of a sci-fi flavor to it that will no doubt allow Planescape fans like me to reminisce.

The most exciting part in all this, to me and to many others, is the promise of a good story. That’s what Planescape: Torment got right, and what so many other RPGs struggle with. Brilliant graphics and engaging battles are only half the game. You’ve got to be drawn in.

Brian Fargo, one of the founders of Interplay Entertainment and inXile, cites this.

Of all the games that we did at Interplay, [Planescape:] Torment is one of the ones I’m most proud of. It was risky. An RPG with the depth and weight of a novel that paid off in its worldwide recognition for its thought-provoking literary story and emotional power.

Exactly. I’m personally also stoked because Colin McComb is on board. He was one of the lead writers for Planescape: Torment and is a creative lead in Tides. He summarizes the story setup in the Kickstarter video, and it sounds amazing — and certainly reminiscent of the Nameless One’s tale in the original Torment. The scope here seems bigger, though.

Of course, it’s all still just theoretical. The game hasn’t been made yet, but it’s totally on track to get there. I for one have every confidence that it will deliver, because of where it came from and who’s involved. A handful of very creative people and a legion of fans brought it this far, and I’d say the RPG community at large will benefit from its success.