Hackers have seized control of the official @BurgerKing Twitter account, and are running wild with it. The running joke of the hack is that Burger King has been sold to McDonald’s, but there are also a fair number of nonsensical tweets and links to rap songs thrown in for good measure. We’ve got screen shots for you, since we’re assuming this thing won’t last long.

There’s no official word about who’s behind this yet, but it looks like the group responsible calls themselves iThug$, though they’ve referenced several other hacker groups as well. The account @YourAnonNews has even tweeted about it, albeit vaguely:

The account is primarily retweeting mentions of the hack, the best of which so far is by user @flibblesan:

The last official tweet from Burger King seems to have come yesterday when they announced that today would be the last day for their buy one get one free promotion for their chicken sandwiches. Then madness took over this afternoon.

Besides the overall theme of the hacked account claiming Burger King has been sold to McDonald’s, they also make multiple claims that it’s related to excessive drug use by Burger King employees. 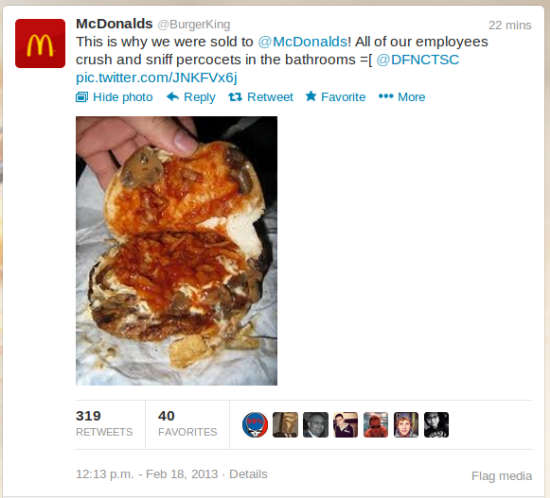 There are also a few links to rap videos, because we see no reason for there not to be. There was also this cartoon about the Hamburglar’s seedy past: 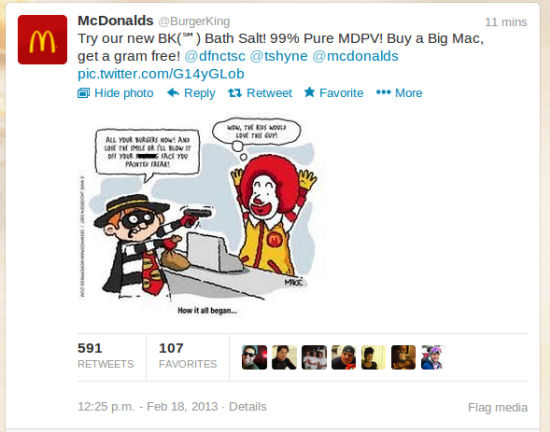 There are also quite a few calls to follow other accounts.

The most surprising thing about this hack so far is that it actually seems to be helping Burger King. Their account has shot up by several thousands followers in the last few minutes as more people find out about the hack, finally pushing them over the 100,000 follower mark. No such thing as bad publicity I guess.

As of right now, the account is still in the hands of the hackers, so the tweets keep coming. We didn’t include all of them up until now because of language, and the fact that some of them are just bananas. Head over to twitter.com/burgerking to follow the madness for yourself.