A preschool has banned children from pretending to be superheroes, monsters, and wrestlers, because they clearly don't understand childhood. 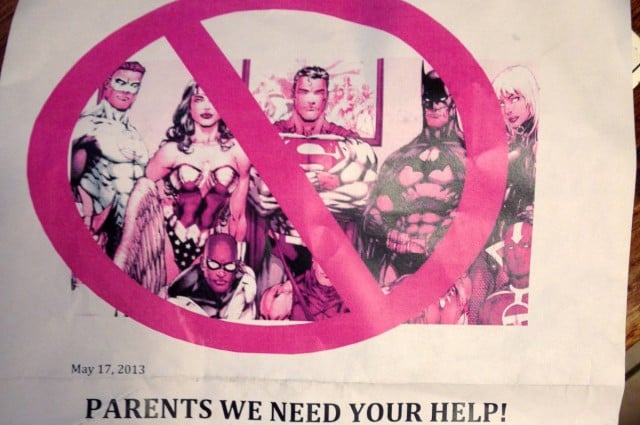 In 1954 Fredric Wertham published his book Seduction of the Innocent which said comic books were the cause of juvenile delinquency in America. They aren’t, but the idea that comics are dangerous keeps popping up. This time it’s showing itself in the form of a preschool that has banned “Super Hero play.” What’s really offensive, though, is what they’ve asked parents to do.

The image of the letter, dated May 17th, was posted to the /r/philadelphia subreddit by user Oremor under the title, “So my son came home and told me make-believe was not allowed at school anymore.”

Here’s the full letter. I’ve done a more thorough job of redacting the name of the school and its employees: 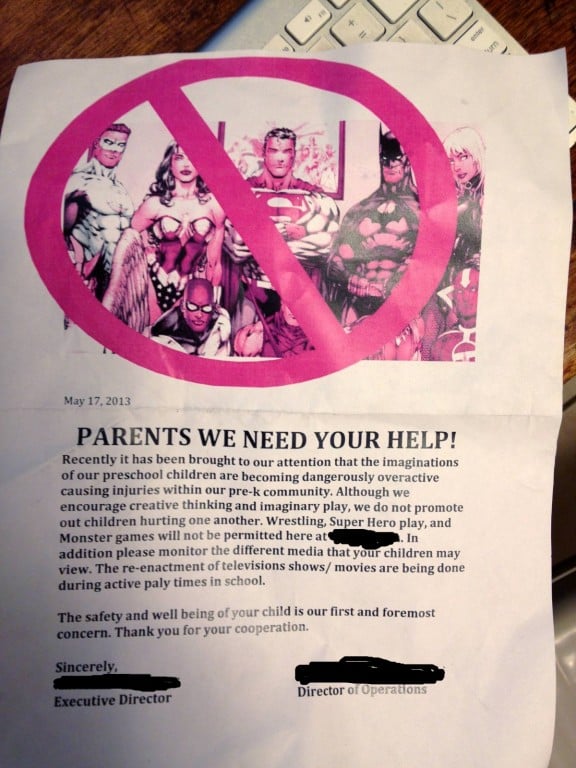 I used to work in a preschool, and kids get out of hand some times. A popular game kids at my school used to play was “zombie tag” where they would try to eat each other’s brains. We had to tell the kids they weren’t allowed to play anymore because of all the biting, so I understand where the school is coming from on this. If kids are play-fighting as superheroes to the point of hurting each other, then yes — tell them they’re not allowed to do that at school.

What I take issue with is the school telling parents, “In addition please monitor the different media that your children may view.” I also take issues with all the spelling, punctuation, and grammar mistakes, but let’s focus on that first thing.

Parents should absolutely monitor what their kids are watching, but this letter falls just short of the school telling parents their children aren’t allowed to read or watch superhero stories. That bothers me not just because I love superhero stories, but also because I’m a parent who doesn’t think my child’s school should be dictating how I raise my kid.

If I want to sit down with my child and rewatch all of the ’90s X-Men cartoon on Netflix (which I just did) or bring her with me to the comic book store every week, I’m not going to ask her school’s permission.

Deciding what games kids can and cannot play while they’re at school is the school’s decision, but don’t tell parents what they’re allowed to show their kids at home.

I’ve reached out to both Oremor and the preschool that sent out the letter for comment, and will update the story when I get a response from them. The woman I spoke to at the school told me she didn’t know anything about the letter, and would pass my information along to her supervisor.

Certain behaviors should not be allowed in schools. However, the inappropriate behavior is what needs to be targeted (i.e. bullying, biting, fighting…) not the imaginative play of children. My son and I have always utilized superheroes as role models. We often talk on ways problems could have been solved rather than utilizing violence.

This is nothing more than a bully who has her own issues with superheroes and is trying to force her views down the throat of others. Luckily i have my own superhero to turn to. THANK YOU REDDIT!

I also spoke on the phone with two representatives from the preschool, including the Director of Operations. Neither would comment directly on the letter or the school’s policy on superheroes.