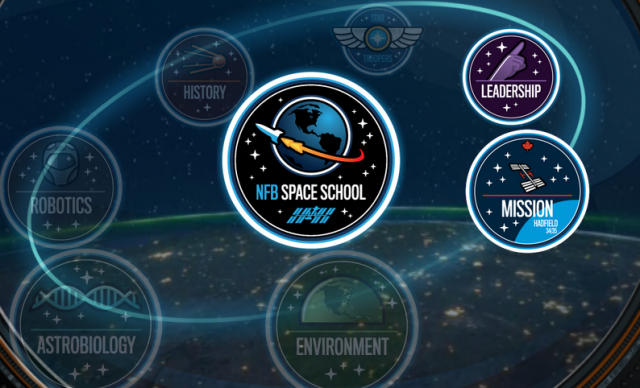 Canada seems to be rallying behind astronaut Chris Hadfield in a big way, and rightfully so. He’s the first Canadian commander of the International Space Station, and he’s doing a lot to bring attention to the mission and Canada’s part in it. Today the National Film Board of Canada launched Spaceschool.nfb.ca, a site centered around teaching young people about space — and Chris Hadfield.

The site kicked off this afternoon with a twenty-minute Q&A that had Hadfield fielding questions from both the media and students. It also features a Leadership Module, a site dedicated to Hadfield. He talks about his background, why he wanted to be an astronaut, and how he made it happen despite small obstacles like there not being a Canadian space program when he was a child.

Other modules on the site include the Misson Module where students can follow Hadfield’s mission as the first Canadian Commander of the International Space Station. “Mission” and “Leadership” are the only two modules currently up on the site, but there are more that are labeled as “Coming Soon”. These modules include Environment, Astrobiology, Robotics, History, and something called Star Troopers. We can only assume these will all be tied in with Hadfield somehow.

Hadfield is a prolific tweeter of images of the Earth taken from the ISS, and he frequently mentions the environment. Some of the experiments he’s talked about that are being done on the ISS would fall under the category of astrobiology. Another favorite topic of Hadfield’s is the ISS’s robotic Canadarm 2 which, as the name implies, was one of Canada’s contributions to the ISS.

The History Module could focus on the history of the Canadian space program, but at the rate this site is going, it could just as easily be about the history of Chris Hadfield, and that’s perfectly fine with us. Lastly, we have no idea what Star Troopers is, but it sounds neat, and since it will most likely be tied in to Chris Hadfield in someway, we’re on board.

The site is built around giving students access to information about the Canadian space program and making sure educators have a way to easily bring that information into the classroom. Interested educators can get access to these resources through the Space School’s Educator Resources page.