PixelJunk Eden, an Extremely Weird and Awesome Once Exclusive PSN Game, is Heading to Steam 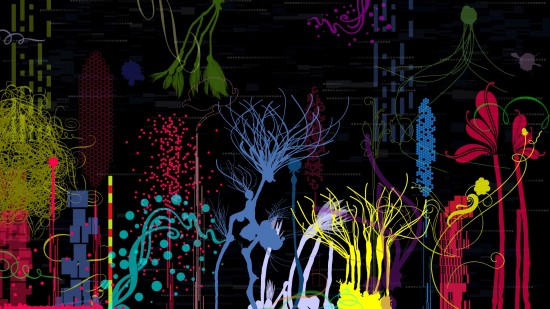 Q-Games, makers of the PixelJunk games, has revealed today that PixelJunk Eden will be breaking out of its PSN exclusivity and hitting Steam. Though PixelJunk Eden has been released since 2008, the game remains absolutely excellent, and the Steam version will include its Encore DLC pack, which adds new levels, and the whole package will only cost $9.99, which after having played through both Eden and Encore, I personally consider a steal.

Eden is difficult to describe. The player controls a little character, dubbed the Grimp, who can shoot and swing around on a web, popping open enemies, which explode and fill the screen with pollen. The Grimp flies around through the air and swings on the web in order to collect the pollen, which opens up seeds, which in turn grows new scenery for the Grimp to latch onto in order to travel around the level.

The game combines a very trance-like, mesmerizing soundtrack with the visuals you see in the shot above and below, and makes for a wholly unique, fun experience. Generally, onlookers will have no idea what you’re doing, and when it comes to video games, that’s always a plus in my book because it usually means the game is something new that people haven’t seen before.

The game also features cooperative play, which was pretty fun, as Grimps can latch onto each other, as well as swing off each other like a trapeze. The Steam version of Eden has been modified a little bit as well, giving the Grimp an ability to warp back to the last point it was resting — which is a boon, as in the PSN version, if you fall from a great height, it’s usually somewhat of a pain to get back to where you last were. In fact, it almost seems a bit like a cheat button. Along with the warping ability, players will now be able to save their progress within each level, rather than in between levels.

Along with the game and its expansion, Steam will also be selling the game’s 17-song soundtrack for only $5.99. The game will hit Steam next week, and during its first week, Q-Games will be running a sale that gives 20% off everything, so make sure you keep on top of the release and scoop it up when you can.