Steam Does The Improbable: Forces Apple to Address its Graphics Software Limitations 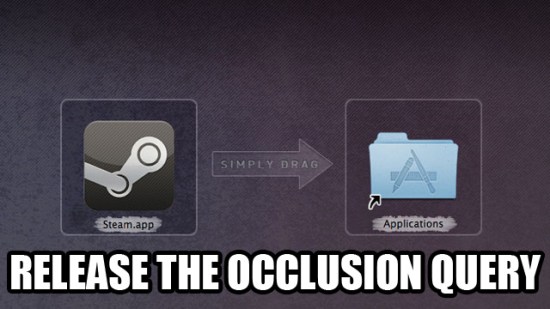 THINQ.co.uk is reporting that Apple has pushed out a significant OS X software update, designed to improve performance and visual quality in the Mac version of Valve’s Steam client. Since Steam was released for the platform three months ago, many sources have lamented the performance of the games compared to their Windows counterparts. Some have even gone as far as to set up Windows partitions using Boot Camp to avoid the reduced frame rates in the Mac client.

That’s all changed now, thanks to the Apple’s graphics update and some Steam optimizations added by Valve. By tightening up some software inefficiencies pertaining to how the OS drives the graphics hardware, the games no longer have such a pronounced reduction in frame rate when running at higher resolutions or with cranked-up visual settings. One of the most hyped of these visual improvement is known as an “occlusion query,” or as the guys at Valve put it:

“It’s a simple technique that just about every game uses, but it produces a surprisingly convincing effect. What we do is issue queries for light-emitting objects in our scene such as light bulbs or a disc representing the sun. A given light source may be partly or wholly occluded by other geometry in the scene and we use the occlusion query to determine how occluded it is. The percentage of a given light source’s screen area which is actually visible is used to scale the intensity of an additive glow sprite which is drawn over the frame without any z-buffering.”

So, in essence, they’ve unlocked the graphics card’s innate ability to draw realistic lights, especially when they’re partially blocked from the player by some in-game object. With all these improvements, the games should look better without any reduction in frame rate. In fact, some initial benchmarks have indicated that various games run at rates 15-120% higher than they did before the update. And that’s not even the end of it… Valve claims that there are still more optimizations and features that Apple could implement on the fledgling platform to make the graphics hardware run even better than it does now.

If anybody needs me, I’ll be playing Portal until then.