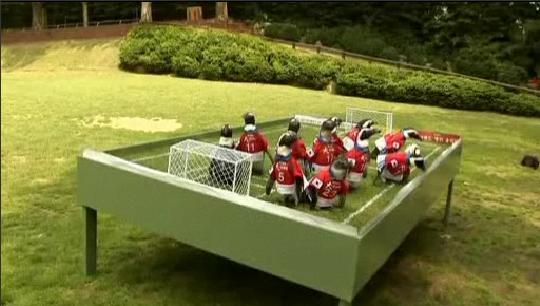 In an onslaught of adorableness, these perky little penguins have donned their national colors to support South Korea in the World Cup this year. If I played soccer for South Korea and saw these little guys, that would be all the motivation I’d need to win it all. While the trainer interviewed in the video explains the reasons why he put on the little publicity stunt, he doesn’t appear to have trained the penguins very well. The goalie is way out of the goal zone and the penguins seem content to just stand there most of the time. Also, there appears to only be one team, so South Korea wins either way.

Then again, this soccer game probably ended as only a soccer game can: In an epic, nail-biting 0-0 tie.