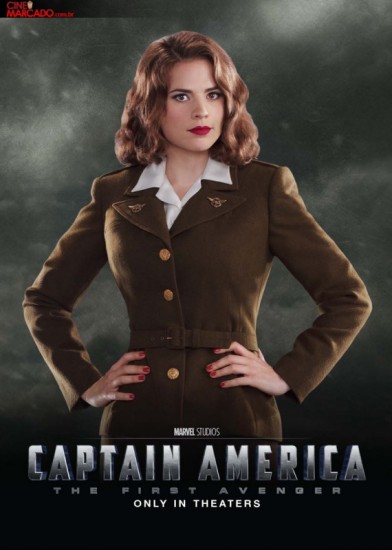 We found out back in May that Agent Peggy Carter from the Captain America series will be the next character to get her own Marvel short, which was thought to be very far away from release on the Captain America: The Winter Soldier DVDs.  Fortunately, we now know that we will get to see Hayley Atwell’s Peggy Carter kicking butt sooner than expected, as the short will be included as a special feature on the Iron Man 3 blue-rays.  This is in addition to the first airing of the short, at San Diego Comic Con this year, which some very lucky fans can look forward to catching.

Talking about her upcoming role in The Winter Soldier and the Peggy Carter short with The Big Issue, Atwell described Carter by saying that,

“she can do everything Captain America can do but backwards, in high heels”

Given how interesting the character is, and the fact that Marvel listened to fans who wanted to see more of Peggy Carter, excitement is certainly high.  The short, which will show us what Carter did after the end of Captain America: The First Avenger, comes along with the promise of more of the character in the upcoming Captain America: The Winter Soldier. In the new film Carter will appear in “flashbacks,” while her niece, S.H.I.E.L.D. Agent Sharon Carter played by Revenge‘s Emily VanCamp, will also appear.  Captain America: The Winter Soldier is set to come out in April of 2014, but we can see what Atwell has called a “snapshot as to what Peggy is actually, really capable of” much sooner than expected.  The Iron Man 3 DVD’s will be released sometime in late August or September, with the UK release already set at September 9th.

(via Screen Rant, The Big Issue)