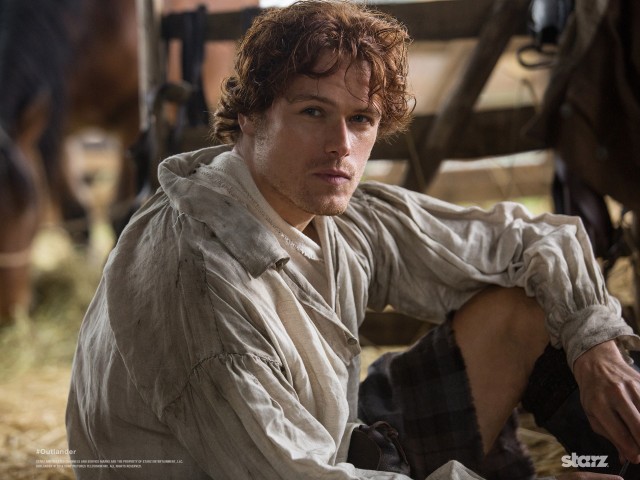 Only one episode of the time-traveling bodice ripper that is Outlander has actually aired on the Starz network so far, but the show’s definitely coming back for another season. Gosh, I can’t imagine why everyone’s so interested in… um… what was I saying? I got distracted by Sam Heughan’s withering Scottish smolder. Excuse me.

Created by Ron Moore (yes, that Ron Moore), the rest of this season’s 15 remaining episodes will follow the first of Diana Galdabon’s science fiction historical novels, which—if I remember correctly—are about a WWII nurse who gets caught in a time rift and must marry a handsome Scottish highlander (no, not that Highlander) to survive 18th century English-occupied Scotland. The second season will focus on the plot of Galdabon’s second novel in the series; there are eight in total.

This is certainly great news for Heughan, above, who could do with a bit of good luck: according to an interview with Vulture, he auditioned for the similarly fantastical Game of Thrones about seven times, including for both Renly Baratheon and Loras Tyrell. Probably not at the same time, I hope. That would have been weird.

“I auditioned for Game of Thrones seven times! Loads of times. I auditioned for Renly, Loras, some of the members of the Night’s Watch. And I’d always get so close! I’d be like, ‘Guys, just give me a sword!’ [Laughs.] Everyone was going in for those parts.”

But it’s okay, because he likes his Outlander character Jamie better anyway. And not just because he spells his name the right way and not like a dumb ‘ol Lannister:

“This part felt different. I knew this character. I felt a connection with him. I knew where he had come from. And I was excited to work with Ron [D. Moore]. And I love having a book or something to research to fall back on, so occasionally I can go double check. But the material was already there. Diana actually sent me the books, some of her short stories that she hadn’t published, some extra scenes, and this graphic novel, The Exile. And actually, to be honest, that was the first time I started to see Jamie as sort of a separate entity, because if you read that book, you start to see where he’s come from, and his life.”

The first episode of the series reportedly got 5 million views on multiple platforms, including online. Here’s to hoping the success continues, because God knows we all need more time-traveling in our lives.

(via DigitalSpy and Variety)

Previously in Men in Kilts