This is all thanks to a Rob Delaney tweet. 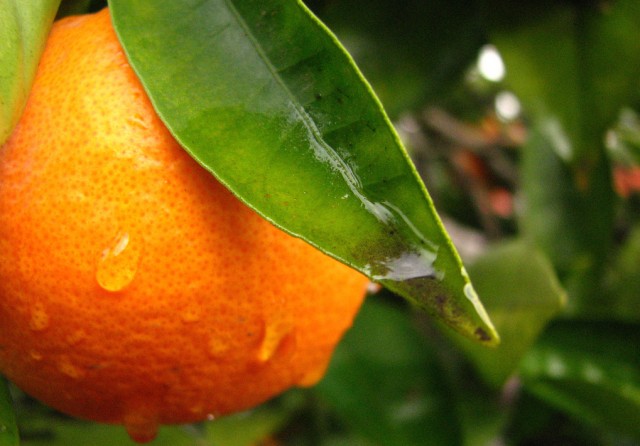 This morning, Rob Delaney tweeted about oranges, and it made me curious about the history of the word. It had come up in an earlier article about why we call redheads “redheads” and not “orangeheads,” so I wanted to revisit it. Here’s why oranges are called oranges and why sometimes they’re green.

Good job whoever named the orange.

It’s probably common for people to assume that oranges were named for their color, but as I pointed out in the redheads story, the word for the fruit came first by more than 200 years.

It derives from the Sanskrit word naranga which refers to the tree itself rather than the fruit. After filtering through other languages (Persian narang, Arabic naranj, Venetian naranza, Italian arancia) we eventually get to Medieval Latin’s word for the fruit itself, pomum de orenge (inexpertly translated by me to mean “Fruit of the Orange Tree.”)

From there, we get the French word orange around the year 1300, but it wasn’t used in English to describe the color until around 1540.

Because it’s the Internet, a lot of people have responded to Delaney’s tweet claiming that oranges aren’t actually orange.

This isn’t entirely untrue, but it’s worth explaining in case anyone thinks their supermarket is just spray painting green oranges orange like the cards painting the Queen of Hearts’ white roses red.

Oranges can be green. While some fruits start out green and change color as they ripen, a green orange can be perfectly ripe. There are a number of conditions that can affect an orange’s color including variety, climate, and nutrient levels. Even after an orange turns orange, it can change to a green color due to the fruit’s chlorophyll.

To make them more appealing to grocery shoppers, packing houses “degreen” oranges by exposing them to ethylene gas. This gas destroys the chlorophyll held in the rind, allowing the orange color to show through—similar to how leaves change color in the fall. If you’re curious, the University of Florida recommends five parts per million as the ideal ethylene levels and recommends degreening at temperatures between 82 to 85oF. If you want to know even more about degreening, you can read their full recommended guidelines for the process.

If you don’t want to read a four-page document about citrus packaging practices, just know that yes—sometimes oranges are green, and people use science to make them more orange. FDA guidelines do allow for the use of artificial colors in oranges without explicit labeling, but everything I’ve seen in researching this article points to ethylene degreening as the preferred method.

None of this changes the fact that whoever started calling oranges “oranges” did a damn fine job.

(via Grammar Girl, Etymonline, and The University of Florida, image via Cecilia Aros)