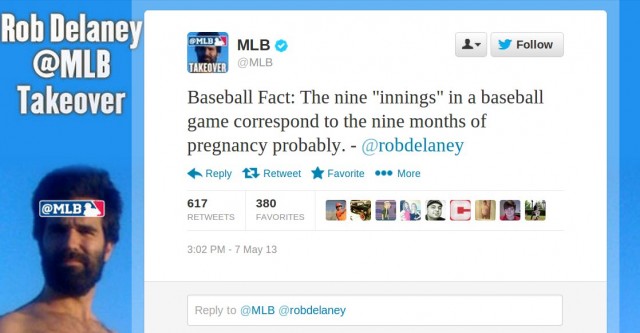 Full disclosure: I think baseball is boring, but I think comedian Rob Delaney is ridiculously interesting. Delaney has control of the Major League Baseball Twitter account, and the results are amazing. Besides the jokes themselves, there’s the added bonus of seeing the replies from baseball fans who don’t understand what’s going on.

Delaney is enough of a baseball fan that’s he performed the National Anthem at a few major league games. Here he is performing at a Dodgers game last month:

If you’re not familiar with Delaney or his Twitter account you should take some time to get to know them both. His comedy is endearing, and his Twitter feed is over-confident, stupid, and hilarious. Now that he has control of @MLB, you can expect to see things like this coming from the voice of Major League Baseball:

Babe Ruth made the “nougat” for his famous candy bars in the basement of Yankee Stadium with the help of local nuns. – @robdelaney

And as for the baseball fans who aren’t in on the joke, Delaney has some advice for them too:

For those questioning my baseball facts today, maybe pick up an almanac or watch the Ken Burns doc again. You’re out of line. – @robdelaney

Delaney’s reign on the MLB’s Twitter account only ran from 12-7 PM today, but for those few short hours I was genuinely interested in baseball — at least Rob Delaney’s version of baseball.