"Yeah it was totally fun, um, assasinating that king or whatever." 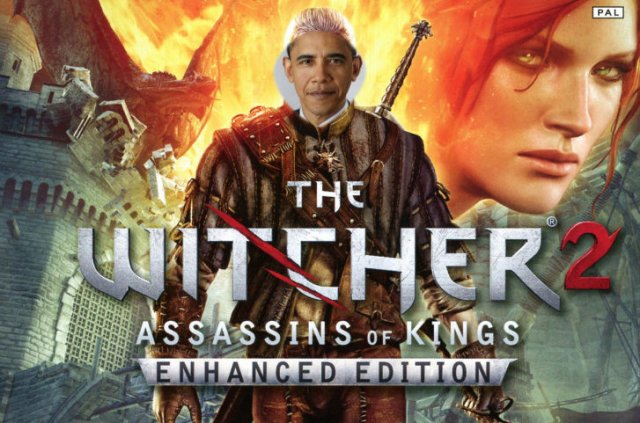 Diplomatic gifts are a long and time-honored tradition, but they’ve gotten a bit gauche lately. Gone are the days of giant pandas and ornate writing desks made from 19th century British ships. Instead we’re giving out region-locked DVD sets, iPods filled with showtunes, and video games that nobody’s ever going to play because they don’t have time.

Back in 2011 when Barack Obama first visited Poland, he received a collector’s edition copy of the then recently-released The Witcher 2 from Prime Minister Donald Tusk, an action role-playing game created by Polish studio CD Projekt RED and inspired by the works of writer Andrzej Sapkowski.

Today the President returned to the country and gave a speech praising the game, even though it’s abundantly clear that he’s probably never even attempted to play it in his life:

The last time I was here, Donald gave me a gift: the video game developed here in Poland that’s won fans the world over, The Witcher. I confess, I’m not very good at video games, but I’ve been told that it is a great example of Poland’s place in the new global economy and it’s a tribute to the talents and the work ethic of the Polish people, as well as the wise stewardship of Polish leaders, like prime minister Tusk.

Yikes. It’s an awkward workaround, but honestly, would you prefer a president who sits around playing complicated Polish video games about dragons instead of doing his actual job? Well, some of you yes, probably, but personally I’m cool with him finding something else to occupy his downtime. So long as it’s not Candy Crush Saga, we’re good.

And of course, CD Projekt is probably just happy for the free publicity, especially considering that The Witcher 3 is going to get a release date and a trailer pretty soon. It’s sort of a win-win for everyone when you think about it. Except maybe all of those terrified feudal villagers that could use a white-haired supernatural monster slayer to save them, but since when do we care about those guys? They don’t even pay taxes.