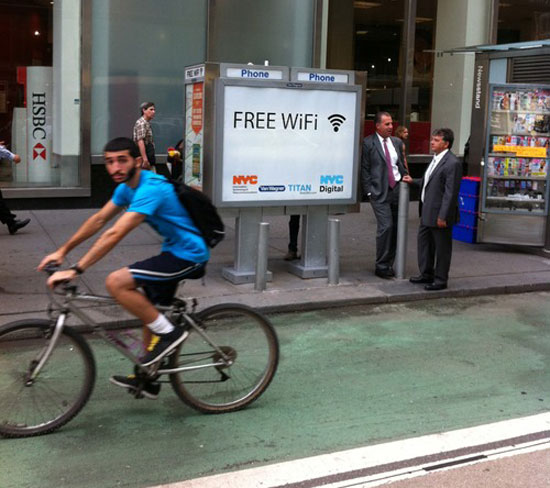 Of all the detritus remaining from the pre-cellular age, payphones are among the most visible. However, a new plan launched in New York City might give these once useful call kiosks a new lease on life by converting them into free Wi-Fi hotspots.

The City announced yesterday through their Tumblr that 10 such hotspots across three of the city’s five boroughs are now in operation. If you’re in the area and hankering for some free Internet, you can find them at these locations:

This is only a start, as the city insists that it plans a larger rollout across more of the city in the coming months.

According to GigaOM, the plan is a win-win for the city, its residents, and the phone companies which operate the payphones. For the pilot program, the $2,o00 upgrades which include a high-powered antenna providing coverage up to 300 feet away, were installed at no charge by Van Wagner Communications. At the moment, accessing the Internet from the kiosks requires a quick trip to the city’s tourism site and that’s it. However, whether or not the plan will continue to be free, or later become ad-supported, has yet to be seen.

Of course, this isn’t the only attempt to repurpose New York City’s payphones. In early April, the city announced that it would replace 250 payphones with 22 inch touchscreen computers connected to the Internet. These would also double as Wi-Fi hotspots, and are reported to be ad-supported. Also, they can be cleaned with a hose. Nice.

Assuming both programs continue, that means 260 or so payphones will be providing a far more useful service to NYC denizens. That just leaves about 12,740 to go.