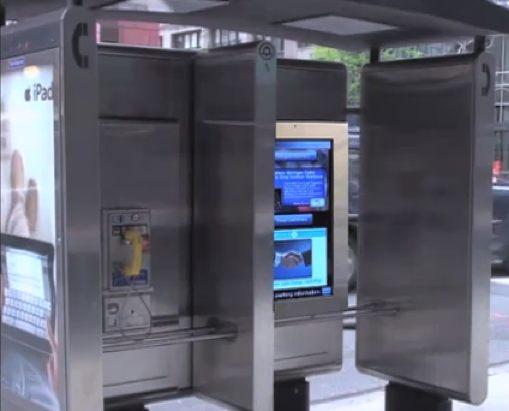 Considering that cellphone ownership in the U.S. has pretty much become the rule instead of the exception, you might expect that pay phones would die out entirely. It looks like they may, but not in the way you might expect. As part of a pilot program in New York City, 250 pay phones are going to be removed, but something will be put in their place: 32″ ad-supported touch screens, complete with Internet access for email, Wi-Fi hotspots for device use, and cameras for Skyping and what-have-you. Sounds a little better than holding a filthy piece of plastic up to your mouth, doesn’t it?

Spread across all five boroughs, the pilot units should give the city an idea of whether or not these touch screens are suitable to replace the city’s 12,800 pay phones when the current contract expires in late 2014. Barring something crazy, the screens seem promising and practically a no-brainer for pretty much everyone involved.

The screens would cost zero money for the city. Ad revenue would cover the installation and operating cost of the units, and would eventually provide the city revenue in the form of 36% of ad money. Although you might think it’d be a bad idea to leave ostensibly expensive tech outside for anyone to get at, the screens are incredibly durable; they are designed to be cleaned by jet hose. As a bonus, they should also remain fairly clean because even though they’ll be frequently touched, they have neither nooks nor crannies to their surface and all you have to do is hose ’em down.

And when it comes to functionality, they’re obviously going to blow a standard pay phone out of the water. The idea is that each touch screen would allow users to access email or Skype, and would also provide information about the surrounding area, indexing restaurants, points of interest and the like. They’d also allow users to file complaints with the city, or request city information. The screens’ power is not totally unlimited though. While they do have Internet access, the ability to browse is to be severely limited to certain sites and applications. It’s unclear whether those restrictions affect just use of the actual screen, or use of the Wi-Fi hotspots as well.

It’s also unclear what exactly will be expected from the user. The screens are heavily touted to be ad-supported, but the distinction between being ad-supported and therefore free to the city, and being ad-supported and therefore free to users is hazy at best. The New York Post references users paying to use Wi-Fi, email access, apps, and outlets of computer kiosks soon to replace pay phones in the subway. However, these underground kioks are not exactly the same as the above-ground models and measure a more modest 22″. Any other differences are still unclear. Moreover, how much this sort of access will cost, if it does cost, is still unknown.

Regardless, the widespread installation of public touch screens seems like one of those huge steps into the future we’d all be waiting for while whining about our lack of jetpacks. Granted, most people have smartphones and data plans by now, but if ad revenue can effectively counterbalance the installation, maintenance, and operating costs, who cares if we really need them? If nothing else, they’ll remind you how awesome it is to be living in the future.