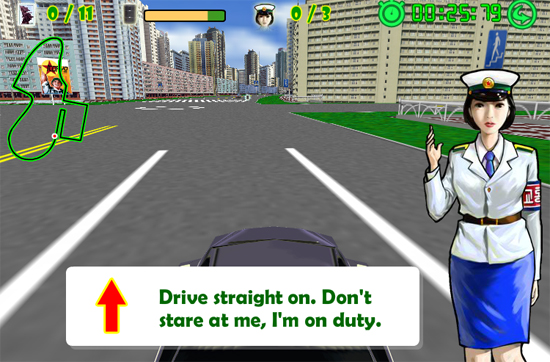 Is this really happening? Is North Korea actually turning over a new leaf? Okay, maybe not the entire country, but a video game development company called Nosotek — the first of its kind to break barriers and venture out in catering to Western markets — has created a simple browser game called Pyongyang Racing. The game was developed exclusively for a British-owned travel agency known as Koryo, which arranges tourist travel for those visiting the Democratic Republic of Korea.

That’s exactly what this game is about: A fast-paced tour of a virtual Pyongyang. Maybe we’re getting ahead of ourselves here, but we can already tell this a definite shoo-in for North Korea’s game of the year!

The rules of Pyongyang Racing are pretty simple: Drive around collecting fuel barrels while avoiding oncoming traffic during your vicarious sight-seeing tour of the North Korean capital. But if you get too distracted by the sights and get in three collisions, it’s game over and the end of a lovely day out in Pyongyang. The game also encourages players to remain on the correct side of the road… “or else.” We don’t how to interpret that, but going by the country’s track record of dealing with civil disobedience, you’d best abide by the in-game laws.

Pyongyang Racing can be played on Koryo Tour’s official website, and is sure to guarantee hours upon hours of fun for the whole family. On an additional note, here’s hoping that “Drive straight on. Don’t stare at me, I’m on duty” achieves Internet meme status.

(Polygon via The Verge)