The End of an Era: Kim Jong-il Looking at Things Tumblr Bids Farewell 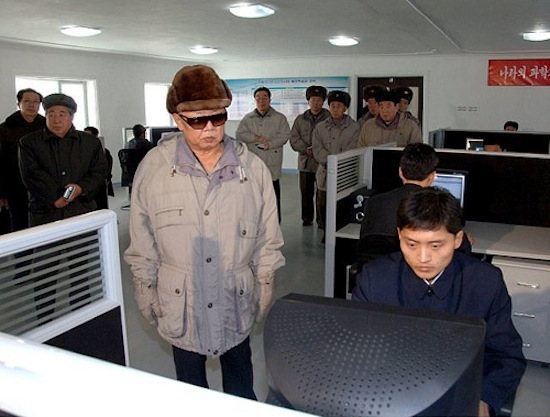 It is an indelible law of the universe: Nothing on this world or any other is infinite, all things must sadly come to an end, and this even extends to Tumblr blogs. Yesterday, the Internet community woke up to the sad news that the much beloved and Webby Award-winning Tumblr Kim Jong-Il Looking at Things will not be posting any further pictures of the late Kim Jong-il acknowledging random objects with his glorious gaze. Though the blog won’t be pulled down, that isn’t to say this hasn’t spoiled our morning.

Fear not, Kim Jong-Il Looking at Things wasn’t slapped with a cease and desist order by the North Korean government, the blog’s creator simply felt that it had a good run and was time to put it to pasture, living on through its legacy. On the blog’s retirement, the creator had this to say:

when the dear leader decided quit this mortal coil i vowed to keep this blog running for as long as i could. one year later, my photo archive is exhausted and it can no longer go on. it will remain here for as long as tumblr lives if you ever want to reminisce, but no more updates will come.

There may not have been enough pictures of North Korea’s former exalted leader to keep a Tumblr going — one man can only look at so many objects in his life — but there was plenty enough to be published in a book. For 24 euros, one can order a collected edition compiling all the photos in one convenient tome to share with family, friends, or your favorite dictators. If Kim Jong-il were still around, we assure you he’d be looking at the book right now.

(via Kim Jong-Il Looking at Things)