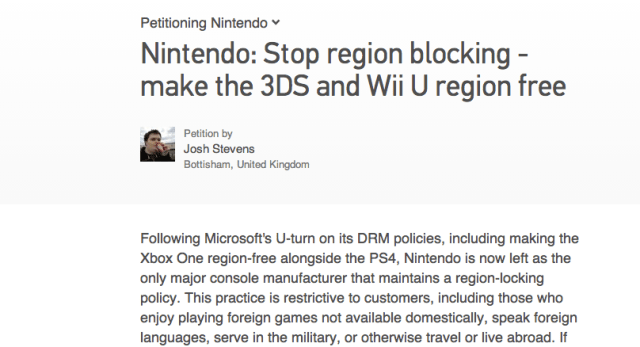 Nintendo, oh dear Nintendo, how art thou out of step with pretty much every other modern console? Let us count the ways. Oh, here’s a telling one —  while the Xbox One and PS4 both eschewed region locking, Nintendo kept the restrictive practice in place on the Wii U. While there are no notable Japanese exclusive Wii U titles yet, there are tons of Japanese-exclusive Wii games that I would have loved to play, like the cat office simulator Sukeban Shachou Rena and gorgeous RPG Earth Seeker. But since those games were never released in the United States, prospective importers either have to mod their console or buy a second system from another region to play them. Now, fans are officially fed up and calling on Nintendo to bring region locking to an end on the Wii U and 3DS.

Nintendo fans have taken to Facebook, Twitter, and Nintendo’s own social media outlet Miiverse to send the company their message. In the change.org petition — which is one of kind of a lot of Nintendo-centric petitions on the site —  region-free crusade Josh Stevens explains the rationale behind wanting the big N to do away with region locking:

I mean, that sounds like a pretty reasonable request, right?

It’s not the first time gamers have made it of Nintendo, though. Two years ago, fans similarly banded together via Twitter and Facebook to demand the release of three Japanese games to the U.S. and Europe in a movement called Operation Rainfall. In May of this year, though, the seemingly impossible happened and all three of the games–Xenoblade Chronicles, The Last Story, and Pandora’s Tower— were released in the U.S., with Nintendo publishing Xenoblade themselves. While some saw this as a bunch of fans being butthurt, a more optimistic view is to see it as a raising of the bar in communications between consumers and publishers. Even if it did take a couple years.

Acting like the silent protagonists they love to create, Nintendo has declined to comment on the situation. But given the eventual success of Operation Rainfall — and the fact that Microsoft recently set a pretty strong precedent for listening to players with its changes to the Xbox One — there’s still a chance that the house that Mario built is listening to the cries of “Mii Shall Overcome” in the streets.

(via IGN, image via Miiverse)