The New “Ninja Turtles” Movie Shut Down by Paramount, Release Date Moved to 2014 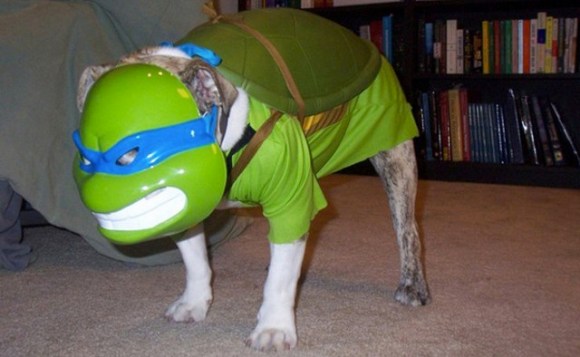 Probably because of karmic reparations for angering fans, pre-production on the new live-action Ninja Turtles movie has been shut down by Paramount, which has also pushed the planned December 2013 release date back to May 2014. Not surprisingly, the issue is said to be with the script — a script for a TMNT reboot that has abandoned the original story so much that it’s basically another movie that is just borrowing the TMNT name because no one could think of anything better. I’ll pretend to be upset about this right after I stop laughing.

At least production hadn’t started yet. Ninja Turtles, which is being produced by Michael Bay‘s Platinum Dunes and directed by Jonathan Liebesman, was still in pre-production in Vancouver, so it was still fairly early in the game for this controversial movie. Some might think that “controversial” is a strong word to describe a TMNT movie — unless you’re a fan of the actual TMNT. As some of you might remember, fans (including me) were pretty excited about a new TMNT movie. And then we heard Michael Bay was involved with it. And then we heard he was changing the Earthly creatures to aliens, which is effing ridiculous. And then Michael Bay told us all to “chill out,” and then we told him to do something to himself that I won’t repeat here.

However, we realize that the ooze that mutates our reptilian heroes does come from outer space, so maybe we’ve just been misunderstanding each other. But it’s still Michael Bay, and there’s still reason to be nervous.

Exhibit A: The issue of the script. The script with the supposed problems is being written by Josh Appelbaum, Andre Nemec, and — shockingly, for me, anyway — TMNT co-creator Kevin Eastman. (If you’re wondering if the other co-creator Peter Laird is not involved because of the changes to his story, then you’d actually be incorrect. The above order to “chill out” from Bay? Laird highly recommends it.) No cast had been announced, though it was revealed that the Turtles themselves (or rather, the aliens) might be shot using motion capture; Liebesman said in an interview with Collider that he really liked how the reboot of The Rise of Planet of the Apes was made. So, let me be the first to nominate Andy Serkis for the role of Splinter if this turns out to be better than we think it is. I don’t want Serkis to be in a crappy movie, but I would trust his talents for giving life to non-human characters in this “sensitive” of a situation.

Schadenfreude towards Michael Bay aside, Paramount is having some trouble making movies lately. In addition to Ninja Turtles, they also ordered an 11th hour rewrite and seven weeks of reshoots for World War Z as recently as last week. That was not too long after they suddenly yanked G.I. Joe: Retaliation from its planned June 29 release, citing a “3D conversion,” which is code for “our movie sucks and we’re desperately going to try to fix it.” So Paramount is apparently becoming the most reliable source of fits and starts rather than awesome movies, and that’s kind of sad.

As far as Ninja Turtles goes, I’m going to hold out hope that any work on this script leads to something we fans can really get behind.