Want to Find Out the Real Reason G.I. Joe: Retaliation Is Being Delayed? 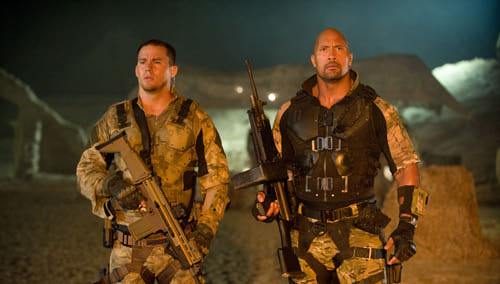 You may have heard that G.I. Joe: Retaliation, which was set to premiere a little over a month from now on June 29, was suddenly pushed back to March 29, 2013. Even after Paramount had already started advertising it, and not subtly. As in, there were commercials on TV, during the Super Bowl, and posters outdoors, and Hasbro already had the toys on the shelves. Paramount’s stated reason? They were going to add 3D effects to it. But the real reason? Well, imagine you have this party to attend, but you had a huge zit on your chin, and you popped it, and it’s a big hot mess. Now, imagine that zit is Channing Tatum, and the party is G.I. Joe: Retaliation.

I hate to compare Channing Tatum to a viciously clogged pore, but that’s part of why Paramount has delayed G.I. Joe 2 for nine months. As we know, Tatum had a big year this year, having taken successful starring turns in The Vow and 21 Jump Street, plus he has Magic Mike coming up (weirdly enough, on the same date that G.I. Joe 2 was supposed to open), and many people are pretty darn excited about that. He also hosted Saturday Night Live this past season, and that puts you in official “big time territory.” When G.I. Joe 2 and its predecessor were shot, Tatum was not quite in that territory yet, so his character kinda gets killed in the movie. Yeah, probably not the best storyline for someone that audiences think is kind of awesome now.

But unwanted onscreen deaths of hot properties aside, the movie was not testing well with preview audiences. At all. So, yes — Paramount wants nine more months to tweak G.I. Joe: Retaliation to perhaps prevent it from completely and totally bombing at the box office in the middle of summer blockbuster season. They don’t want to be That Movie That Came Out the Same Summer as The Avengers, The Amazing Spider-Man, and The Dark Knight Rises and Flopped So Hard It Was Funny. They may have also looked at Men in Black 3′s underperforming numbers and realized that franchises are not sure things these days.

But mostly, they killed Channing Tatum in a movie that sucks at the moment, and they’re just not ready for people to see it.

Imagine you went to a dermatologist to take care of that zit from before, but instead you decided you needed microdermabrasion and your face is all red and scary and terrible. Your nasty, unhealed face is G.I. Joe: Retaliation. The difference is that your face will get better in a few months time, and this is more than we can say about the rejiggering of an entire big-budget action movie.