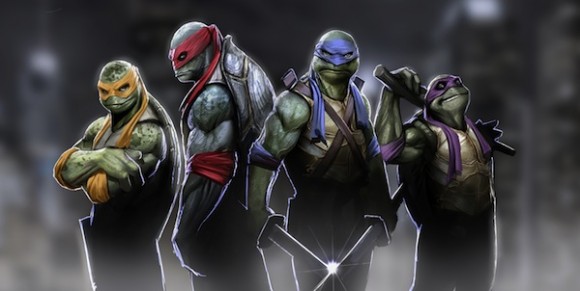 So, we just found out that Michael Bay‘s plans for the upcoming Teenage Mutant Ninja Turtles movie will entail changing the turtles from mutants into aliens. Even though “mutant” was kind of the whole point of the fighting band of turtles, and making them part of an “alien race” not only kills the original idea completely, but it’s just a generally stupid idea if you’re plan is to make a Teenage Mutant Ninja Turtles movie. The “mutant” part is part of the package. But now, people associated with TMNT are speaking up against Bay’s stupid, stupid, stupid decision, expressing what we fans of the series have thought since we first heard the news. No, not T-U-R-T-L-E power. More like rage.

In the spirit of full disclosure, I am a gigantic TMNT fan. So, I, like many other devoted TMNT fans, were pretty taken aback by the announcement that the Teenage Mutant Ninja Turtles would not be mutants. And if they are, indeed, aliens, then they probably operate on a different kind of time, so they’re probably not teenagers. Nor would they be ninjas, since that is an Earthly martial art. And turtles are also an Earthly species, so they won’t even be turtles.

So, wtf are these things going to be, and why are we calling this a movie about Teenage Mutant Ninja Turtles when they will be none of the above?

For starters, Bay, who is producing the new movie, is taking the “pat the fans on the head” route and telling true TMNT fans to “chill” about his horrible idea to ruin TMNT:

Fans need to take a breath, and chill. They have not read the script. Our team is working closely with one of the original creators of Ninja Turtles to help expand and give a more complex back story. Relax, we are including everything that made you become fans in the first place. We are just building a richer world.

I really hate it when people tell me to “relax.” And no, Michael Bay, making the turtles aliens means that they will no longer have “everything that made [us] become fans in the first place.” Because part of that was the slime in the NYC sewer that turned normal, Earth turtles into ninjas trained by a similarly mutated sewer rat (also from Earth). Another thing: the turtles love pizza. Not because they landed on Earth and discovered it. Because they are born and bred New Yorkers (who happen to be mutant turtles). It was the slime that came from aliens. The ooze. And that’s it.

Ninja Pizza speculates that the TMNT creator in question is Kevin Eastman, since Peter Laird has already said that he won’t be involved in this movie. And we have yet to hear from Eastman about the changes Bay wants to make to the turtles’ origin story.

While we haven’t heard directly from a TMNT creator about this yet, we do have a pretty ardently angry statement from one of the actors from the original movie. Robbie Rist, who provided the voice of Michaelangelo in the first TMNT movie, used some words that we, personally would not use to describe what Bay is doing to the story. But they illustrate the point. From TMZ:

“You probably don’t know me but I did some voice work on the first set of movies that you are starting to talk about sodomizing.”

Rist added, “I know believing in mutated talking turtles is kinda silly to begin with but am I supposed to be led to believe there are ninjas from another planet? The rape of our childhood memories continues … “

Okay, while we don’t agree with Rist’s choice of words (because we’re talking about fictional characters who are teenage mutant ninja turtles and not, you know, actual violent crimes), this is just how upset fans are about this. And Michael Bay doesn’t seem to give a flying crap. He just wants to change everything about a well-established story, probably add a slew of unnecessary special effects to a movie that should be gritty and organic (well, as organic as it can be, since it’s still pretty off-the-wall), and make all that gross money he’s going to make.

In summary, The Guardian puts this whole thing in perspective:

“Making the turtles aliens would ruin everything – their desire to be accepted, their bizarre late-1980s street lingo, their fondness for pizza. Everything,” the paper argued. “Are we really meant to believe that there’s an alien race of giant turtles who just happen to all be named after renowned Renaissance artists from this planet, and speak English, and who came to Earth with a giant elderly rat who’s presumably from the same race, just to live in sewers and loudly eschew anchovies at every opportunity? Hardly, Michael Bay. Hardly.”

See? It doesn’t even make sense to make them aliens. Unless Michael Bay wants to create original characters, which is actually what he might have done by accident.

Top pic by nebezial on DeviantART

(via The Hollywood Reporter, Bleeding Cool)