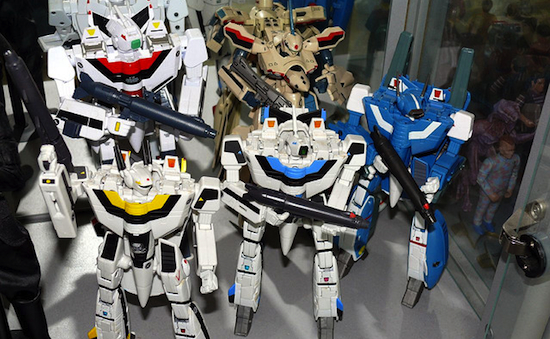 With Optimus Prime and the other Transformers practically rolling in the money generated from their titular film franchise, and relishing their renewed relevance in pop culture, it was only a matter of time before another ’80s cartoon series featuring giant transforming robots — relax, it’s not Gobots — dove in for a piece of the proverbial pie. Warner Bros. is planning to release a contemporary and live-action take on the revered Robotech anime from 1985 which introduced so many children of that generation to mecha and the multifaceted complexity of an animated space opera. Numerous writers have been working on the screenplay for quite some time, but no director has ever been selected to helm the project. It’s now being reported that Warner Bros. is in talks with commercial director Nic Mathieu to helm the film, even though he’s pretty much only ever done commercials.

It’s natural to feel an overwhelming sense of trepidation over the knowledge that Mathieu’s directorial experience lies primarily within the realm of commercials, but Bleeding Cool’s posted a series of videos showcasing his work and demonstrating that they have a science fiction edge and a general quality that is cinematic if anything else. For example:

Prior to Warner Bros.’ offer, Mathieu had been working alongside David Koepp to produce an original science fiction film entitled The Wind, as well as performing directing duties on Eric Heisserer’s film adaptation of Ted Chiang’s sci-fi novella The Story of Your Life. Granted, these movies may not be widely-known, but they succeed in showing that Mathieu at least potentially has the credentials to helm the Robotech movie.

Talks between Warner Bros. and Mathieu haven’t been finalized, nor have any details regarding the plot of the live-action Robotech flick surfaced. For the sake of nostalgia and being thoroughly recognizable, we’re guessing that the studio would opt to work with elements from “The Macross Saga” of the 1985 Robotech series, as it was the first and most memorable story arc. Admit it, you want to see a CGI Zentraedi warrior just as much as we do.

(The Hollywood Reporter via Bleeding Cool, image via phatfreemiguel)