This Is What Michael Bay’s Ninja Turtles Will Probably Look Like, Shorts and All

I take back everything I ever said about Doctor Who not being able to keep secrets.

I’m not going to lie to you: I saw this image floating around on Tumblr sometime last night with the caption “look, it’s Michael Bay’s Ninja Turtles,” and I thought it was a joke. As it turns out, it’s not, and our very first glimpse of the upcoming film has arrived in the form of a crappy Halloween costume—surely a sign of good things to come.

Here, have a full-length image of Michelangelo. Really soak in all the little details. 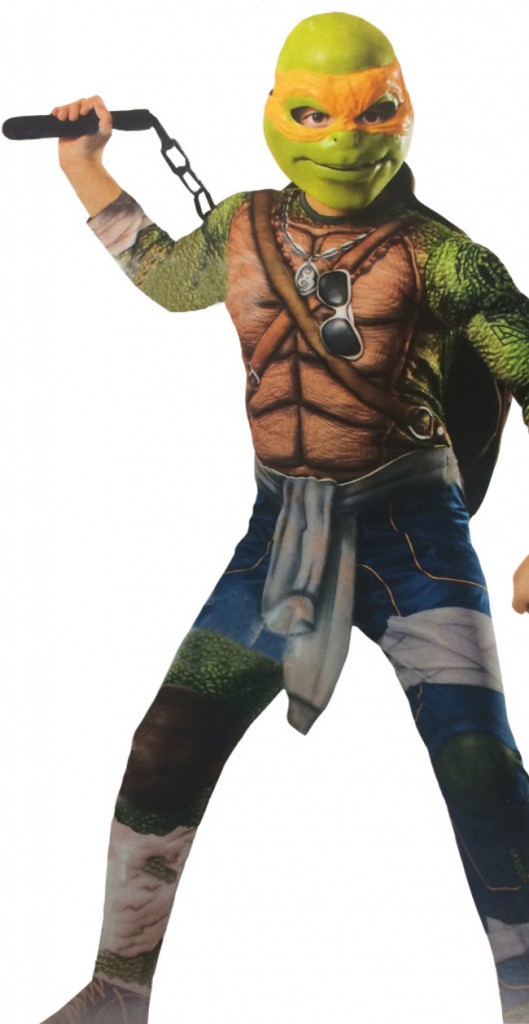 My. There is a lot going on here.

First of all, let’s get the giant elephant out of the way: he’s wearing shorts and sneakers. If that’s not egregious enough, they’re both blue, and blue is Leonardo’s thing. Michelangelo, you are named after one of the world’s most famous Renaissance painters; surely you have a better eye for color than that. He’s also wearing them over his chestplate armor, which is kind of weird. Not to mention he’s accessorized it with some kind of a floppy… fabric thing. What is that, a Gi belt? A loincloth? A sweatshirt that he tied around his waist?

Then again, maybe the shell isn’t attached to Michelangelo’s body. Look at those straps across his chest. They seem to be a part of the fabric of the costume just as the pants are. Where are those coming from? Are they similar to the straps that Leonardo sometimes wears to hold his dual katanas, or does Michelangelo have to wear his shell like a goddamn backpack? Or are they just more douchey accessories? It’s clear he’s got no shortage of them, what with the sunglasses (that wouldn’t even fit his giant friggin’ turtle head you guys, come on), the dog tag necklace, and the four or five different taped up limbs.

That all being said, we have to remind ourselves that this is just a crappy costume and that it might not be all that bad. The actual shape of his head is pretty much what we expected, and he’s wearing the right mask, so that’s probably all we could really ask for. Who knows? Maybe the pants and the straps are less weird in the context of an actual million-dollar-budget movie costume. We all adjusted to Superman taking off his little red briefs for his last movie, so we’ll adjust to this.

Wait, then again, let’s not invite comparisons between Man of Steel and something we want to be really, really good. That probably won’t go over well.