The tiny satellite -- just 12 miles across -- is practically invisible, and was even missed by the Voyager probe. 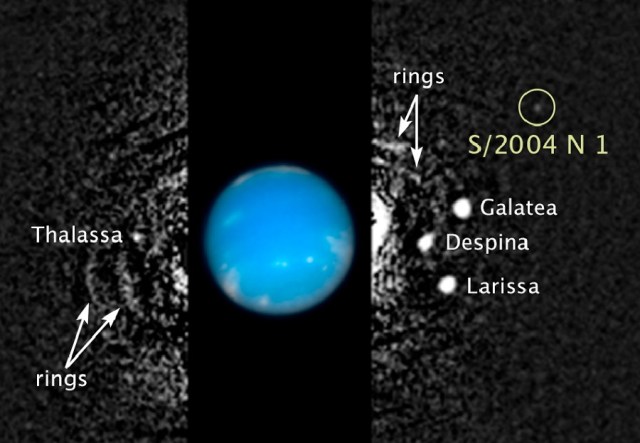 As we discover more and more amazing features of space — like mind-bogglingly massive baby stars and exoplanets that could one day be a new cradle for humanity — it’s worth remembering that we still have plenty of things to learn about our own little corner of the cosmos. The face of our solar system got a new wrinkle this week when NASA announced the discovery of a new moon in orbit around Neptune. The tiny satellite — just 12 miles across —  is the fourteenth to be found orbiting the icy outer planet.

The as-yet-unnamed moon — it’s current handle is S/2004 N 1 — stayed hidden so long not only by virtue of being small, but also by reflecting light only very dimly, making it 100 million times more faint than the faintest star visible to the human eye. It’s so small and dim that even the Voyager 2  spacecraft, which performed a survey of Neptune’s rings and moons when it passed by the planet in 1989 and discovered several moons orbiting the planet, failed to spot it.

That task took the detective work of SETI researcher Mark Showalter, who was studying the moons and arcs, or rings, of Neptune using images captured by the Hubble Space Telescope. In more than 150 images taken between 2004 and 2009, an inexplicable white dot appeared to orbit the distant planet. Using the data at hand, Showalter eventually discovered S/2004 N 1, a nearly invisible moon no larger than many metro areas that orbits Neptune at breakneck speeds, completing a revolution around the planet once every 23 hours.