Astronomers Have Found One Of The Largest Stars In The Milky Way, And It’s Still Forming

You know how the Sun is, like, really big? Well, this is one may eventually be hundred times bigger than the Sun. 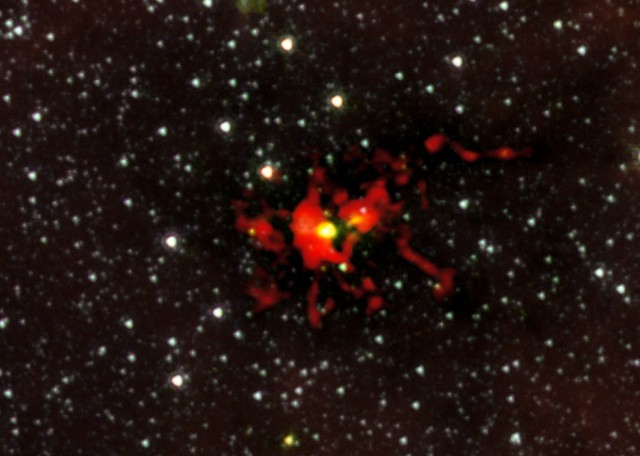 If Hercules hadn’t been made into a constellation, he would probably have been reborn in space as a recently discovered star: the largest one ever spotted in the Milky Way. A group of astronomers found the embryonic star, which is still forming inside of a huge cloud about 10,000 light years away from Earth, using the ultra-powerful ALMA(Atacama Large Millimetre/submillimetre Array) telescope. Now that they’re getting a good look at the massive star, researchers have been able to learn some new lessons about how stars this size are born.

According to new data gathered by ALMA observers, the birth process begins when the core of a cloud like the one this star begins to collapse inwards, with outside material raining in towards the center to form one or more massive stars. While it’s still in the process of forming, researchers believe the star will eventually reach 100 times the size of our own Sun, a size reaached by only one in 10,000 stars in the galaxy. Besides being an awesome discovery in principle, the find is proof that the ALMA array — operated by a partnership of researchers from the United States, Europe and Chile — is shaping up to exceed the high expectations  set for it when it went fully online earlier this year.

The kicker is that, according to Cardiff University’s Dr. Nicolas Peretto, this was all done using just a “fraction of ALMA’s ultimate potential. ALMA will definitely revolutionize our knowledge of star formation, solving some current problems, and certainly raising new ones.” As astronomers continue to fine tune the telescope, we probably won’t see for a few years yet what ALMA can really do. Chances are, it’s going to be amazing.

The full observations on this study are due to be published in the journal Astronomy and Astrophysics. Until then, here’s another Big Star to tide you over. (Sorry, couldn’t resist!)

(via Phys.Org, image via ALMA)