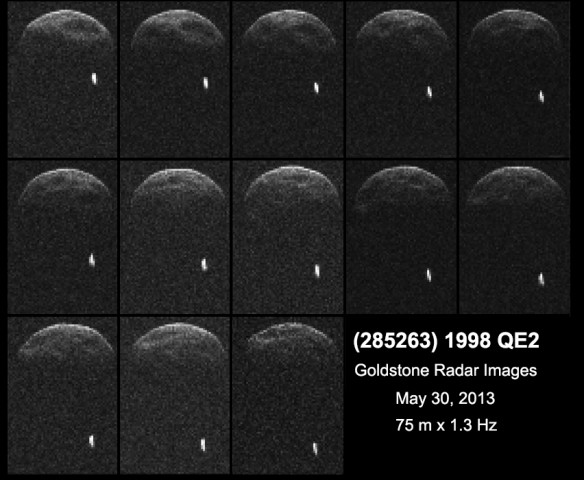 1998 QE2, the huge asteroid passing near Earth today, has yet to make its closest approach, but researchers are already using radar to make some surprising discoveries about the space rock as it hurtles through our neck of the cosmic woods. Case in point? Yesterday, NASA officials learned that 1.7 mile-wide 1998 QE2 — that’s as big as nine cruise ships, to use an unexpected but largely accepted metric — isn’t travelling alone. The enormous asteroid is bringing its own smaller moon along for the ride, which you can get a look at in the video below.

While 1998 QE2’s travel companion is news to researchers, it’s not unprecedented, either. Binary asteroids aren’t entirely uncommon — researchers estimate that up to 16% of asteroids bigger than 2000 feet around travel in systems of two or even three objects locked in orbit. Considering the impressive size of 1998 QE2, it’s not entirely shocking that the stone has picked up a hanger-on.

According to NASA’s radar data, QE2’s moon is nothing to sneeze at, either. While it may look puny in comparison to the rock it’s orbiting, the satellite itself is 2,000 feet wide, though it’s worth noting that’s a preliminary estimate based on the first available data, and thus subject to change as researchers get a better look at it later today.

Want to learn more about today’s flyby and asteroids in general? Be sure to stay tuned for the latest We The Geeks Google Hangout, where the White House will bring together the likes of astronaut Ed Lu, NASA administrator Lori Garver, all-purpose Science Guy Bill Nye and others to talk about asteroids and the work NASA and other entities — like aspiring asteroid mining firm Planetary Resources — are doing to learn more about them. We’ll be hosting the Hangout here at 2pm EDT/11 am PDT, so be sure to check back with us then. In the meantime, if you have any questions for the panel, ask them on Twitter or Google+ by marking them #WeTheGeeks.