UPDATED: The CW Is Planning To Give DC Comics’ The Flash A TV Series 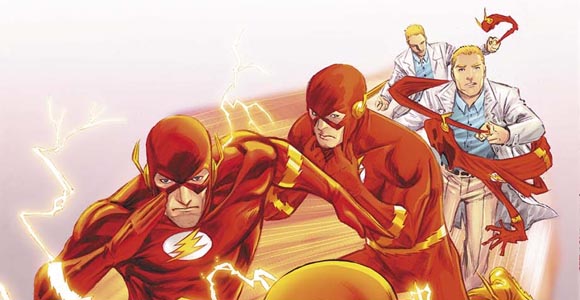 You have Arrow to thank (or curse, as the case may be). According to Deadline this morning, “I’ve learned that the network is fast tracking Flash, a drama project based on the DC character from the Arrow team of co-creators Greg Berlanti and Andrew Kreisberg and director David Nutter. The CW is expected to discuss the project at today’s TCA presentation.”

So we may get more details later today (if so, we’ll update the post) but for now, here’s the gist:

I hear there is an idea is to introduce The Flash on Arrow next season before spinning his off into his own series. I hear Flash will be written by Berlanti, Kreisberg and DC Entertainment’s Geoff Johns who also has written for Arrow. Nutter, who helmed the Arrow pilot, will direct the potential pilot, while Berlanti and Kreisberg are expected to run the potential series. Marc Guggenheim, who developed and executive produces Arrow with Berlanti and Kreisberg, is not involved in Flash as he busy with Arrow, now heading into its second season.

This news is rather surprising considering we heard rumors the week of Comic-Con of The Flash movie (long in development) getting a 2016 release date. While that rumor didn’t turn into fact at the Warner Bros. panel, others mentioned with it did. Namely, Batman joining Superman for Man of Steel 2. But something else to point out about Comic-Con is that there was no mention of the “redeveloped” Wonder Woman show from The CW, Amazon.

Today, Deadline writes “This past development season, the CW developed a Wonder Woman origins project, which didn’t go to pilot. The network in May commissioned a new script with a new writer which has been delivered, but I hear the network has hit the pause button on the project. Flash is certain to get a priority given its A-list auspices.”

I have no problem with the Flash coming to television again. What I do take issue with is hitting “pause” on a project already in development which deserves your undivided attention. If Wonder Woman is so “tricky,” sit down with your best minds for a week and figure it the fuck out. When you crack it, you’ll be able to stop giving excuses on why it hasn’t happened yet.

Putting that aside, the other thought that came along with this news was the lack of diversity in our mainstream comic adaptations. While the character Static had great exposure and acclaim in the 2000 animated series Static Shock, we haven’t had a minority hero get the spotlight since. In fact, actor Anthony Mackie, set to play the Falcon in Captain America: The Winter Soldier, is well aware of the gap. “The biggest thing for me, the most exciting thing for me, is to come out on Halloween and see all the little black kids dressed up like the Falcon,” he told Entertainment Weekly. “There are so many parts of our society that are not catered to or represented fully and this will give a new generation of our society someone to look up to and identify with. That’s why I am so intensely focused on bringing the character to life in a special way.”

For similar reasons, Mackie hopes Wonder Woman gets made sooner rather than later, but in this instance, I see room to make a positive change. Barry Allen (or Bart Allen or Wally West) is not a character whose origin story or background details are tied to any specific regional culture. They could conceivably cast someone of a different race for the role. Though I won’t hold my breath on that.

Overall, I’m starting to get the feeling Warner Bros. should forget about their superhero movie projects and focus on TV shows instead. And as our Managing Editor Susana Polo pointed out when I mentioned that idea, with the CW being a basic cable channel, “Then I wouldn’t have to pay to watch them.” By the by, Justice League: The Flashpoint Paradox, the latest DC Universe Animated movie, is available today.

[UPDATE] Just a small bit of info from the TCA presentation. Deadline writes:

During the CW executive session, the network’s topper Mark Pedowitz gave more details about The Flash project. It will be the origin story of Barry Allen who will be introduced as a recurring character on Arrow this coming season starting in the fall. “We want to expand the DC universe of characters,” he said. As for how the project came together, Pedowitz said he late last year brought up the idea to DC Entertainment president Diane Neslon who turns out had already been discussing it with WBTV’s Peter Roth and producer Greg Berlanti. Pedowitz also confirmed that “Amazon is on pause (as) the script is not exactly what we wanted, and with an iconic character like Wonder Woman, we have to get it right.”

“He may not come in with superpowers,” Pedowitz said, noting the casting process is already underway. “If we get a name, great, if we don’t get a name, they’ll become a name.”

For his part, Berlanti is also developing a Flash movie for Warner Bros. and DC Entertainment, with sources telling THR that the feature is being eyed for 2016. Berlanti will direct and pen the screenplay alongside Chris Brancato, Michael Green, Johns and Guggenheim. Pedowitz also noted that there is no conflict with the movie studio or DC when it comes to the TV series and feature film, as previous efforts have proven troublesome when there’s such an overlap.

(via Deadline, art by Francis Manapul)