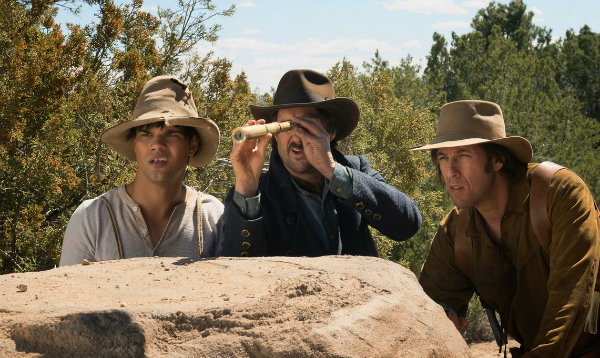 While answering questions at Netflix’s CES 2016 keynote yesterday, the streaming service’s chief content officer Ted Sarandos claimed that the controversial Adam Sandler original movie The Ridiculous Six has been an unprecedented success for the company.

According to Sarandos, “The Ridiculous Six, by way of example, in the first 30 days on Netflix it’s been the most-watched movie in the history of Netflix. It’s also enjoyed a spot at #1 in every territory we operate in, and in many of them it’s still #1.” The Verge reports that Sarandos was including both Netflix original movies and licensed properties in that figure.

The first of a four-movie deal between Netflix and Sandler, Ridiculous Six became the subject of a #WalkOffNetflix hashtag last April after approximately a dozen Native American actors and crew, including the film’s cultural consultant, walked off set in protest after their worries over the movie’s depiction of Native women and elders and its inaccurate representation of Apache culture were dismissed. Cultural consultant Bruce Klinekole later revealed that safety concerns over bows and arrows being used in the production also motivated his walk-off.

Given the widespread outrage over Ridiculous Six‘s content prior to release, and the critical panning the film received after debuting on the streaming service, I had hoped that even Adam Sandler fans might think twice about giving this particular movie their clicks. But The Verge points out that Ridiculous Six did have some practical advantages over other titles on the service:

Adam Sandler’s enduring, cross-generational popularity helps; Netflix kicked its promotional machine into high gear for the release, to the point where it was hard to escape ads for the movie no matter your internet haunts; the service’s user base is bigger than ever and constantly growing, meaning there are way more people available to watch the movie now than a year ago. Netflix’s original films also evade the licensing restrictions that mean licensed movies are available in some territories and not others.

Buzzfeed’s Adam B. Vary also pointed out on Twitter that, especially considering Netflix so rarely releases metrics on their titles, Sarandos’ comments are best taken with a little bit of skepticism:

3. Does “most-watched” mean watched all the way through? And if not, how much does someone need to watch a movie before it counts?

4. What if they’re counting people who accidentally clicked on it? “Huh, what’s this, oh, shit, no no no,” but too late, it’s “watched!”

Regardless, if you were considering hate-watching Ridiculous Six…maybe don’t? Netflix at least sees the film as a success to some degree (or wants us to), and if we’d like Netflix to hold its creators to a higher standard in the future, then the least we can do is avoid this movie like the plague.

(via Polygon and Slate)