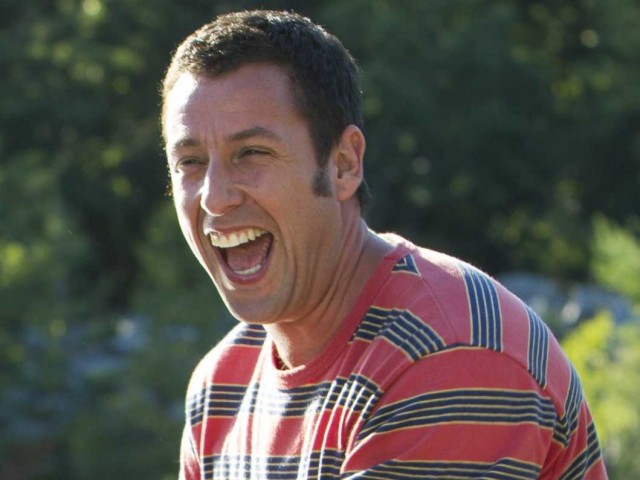 Approximately a dozen Native American actors have walked off the set of Adam Sandler’s Ridiculous Six in protest of the film’s offensive depiction of Native women and elders and its misrepresentation of Apache culture.

The Magnificent Seven ‘satire’ stars “Adam Sandler as a man who grew up in a Native American tribe, with Taylor Lautner, Rob Schneider, and Luke Wilson playing his half-brothers.” Vanilla Ice also plays Mark Twain. Sandler signed an exclusive deal with Netflix for the film (and three others to follow it) last year, citing the unassailable logic that “Netflix rhymes with wet chicks.”

I was asked a long time ago to do some work on this and I wasn’t down for it. Then they told me it was going to be a comedy, but it would not be racist. So I agreed to it but on Monday things started getting weird on the set,

We were supposed to be Apache, but it was really stereotypical and we did not look Apache at all. We looked more like Comanche. One thing that really offended a lot of people was that there was a female character called Beaver’s breath. One character says ‘Hey, Beaver’s Breath.’ And the Native woman says, ‘How did you know my name?’

They just treated us as if we should just be on the side. When we did speak with the main director, he was trying to say the disrespect was not intentional and this was a comedy.

When I began doing this film, I had an uneasy feeling inside of me and I felt so conflicted. I talked to a former instructor at Dartmouth and he told me to take this as finally experiencing stereotyping first hand. We talked to the producers about our concerns. They just told us, ‘If you guys are so sensitive, you should leave.’ I was just standing there and got emotional and teary-eyed. I didn’t want to cry but the feeling just came over me. This is supposed to be a comedy that makes you laugh. A film like this should not make someone feel this way.

[…] Nothing has changed. We are still just Hollywood Indians.

Ridiculous Six‘s cultural consultant also left the set in protest, and had reportedly argued with Adam Sandler and the film’s producers over inaccurate costuming.

I definitely recommend reading Indian Country’s full account of events to hear from more of the film’s actors and creative team; the movie was apparently growing progressively more insulting and had so far featured “Native women’s names such as Beaver’s Breath and No Bra, an actress portraying an Apache woman squatting and urinating while smoking a peace pipe, and feathers inappropriately positioned on a teepee.”

The movie has ridiculous in the title for a reason: because it is ridiculous. It is a broad satire of Western movies and the stereotypes they popularized, featuring a diverse cast that is not only part of — but in on — the joke.

Netflix, stop. You are too good to be associating with a movie like this, and too smart to really believe that throwing around the word “satire” will somehow excuse Ridiculous Six‘s incredible offensiveness.

It’s not satire if you’re simply repeating Hollywood’s historically racist representation, and considering a marginalized group is very obviously and deservedly upset by the film, it’s safe to say Ridiculous Six is reinforcing harmful stereotypes rather than commenting upon and refuting them. If actors are describing leaving the set in tears, how willingly “in on the joke” can they possibly be?

Netflix, you’re too big to punch down, and this “joke” isn’t funny. Get your ridiculous shit together.