Adam Sandler Gets 4 Picture Deal with Netflix | The Mary Sue

Adam Sandler Signs On To Do Four Movies With Netflix, Because It “Rhymes With Wet Chicks” 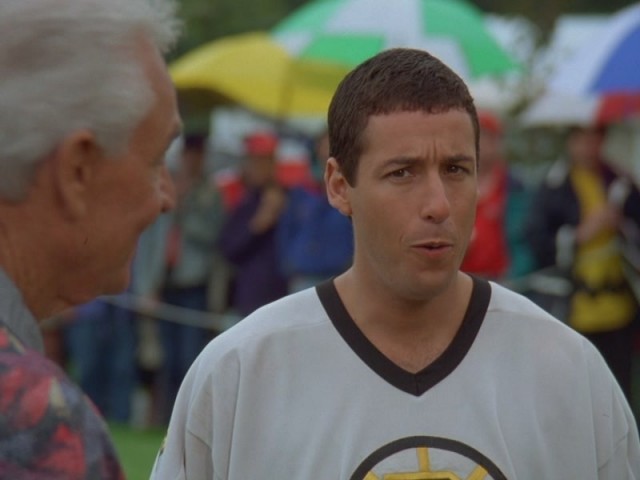 Well, this is certainly a weird direction to go after announcing a Crouching Tiger sequel.

Following their current trend of signing on exclusive movie releases, Netflix has announced that Happy Madison, the film studio run by Adam Sandler, has committed to producing four films for the online streaming service.

“People love Adam’s films on Netflix and often watch them again and again,” Netflix’s chief content officer Ted Sarandos said in a press release. “His appeal spans across viewers of all ages — everybody has a favorite movie, everyone has a favorite line — not just in the US but all over the world.” Well, he’s not wrong, I suppose. After all, who can forget the glorious heyday of films like Happy Gilmore, Billy Madison (though if I’m being honest, that one didn’t hold up so well in the harsh light of adulthood for me), Mr. Deeds, and 50 First Dates?

Here’s the thing, which many critics of Sandler have said: while everyone knows what to expect from his comedy, lately it seems like he’s not really putting in the energy and effort that made his transgressive antics so hilarious in the first place, to the point where most casual movie goers almost hardly bother either. To put it simply, he’s gotten lazy.

Case in point? Sandler’s own addition to Netflix’s press statement, which… eh. “When these fine people came to me with an offer to make four movies for them,” he wrote, “I immediately said yes for one reason and one reason only… Netflix rhymes with Wet Chicks. Let the streaming begin!!!!”

Okay, first of all, that’s technically more of a near rhyme (also sometimes called lazy rhymes, so… there ya go). Secondly, is that a joke? No, really, I’m asking seriously. Usually jokes have set ups and punchlines and usually some kind of narrative focus, which this does not. I bet if he’d sat on it for an extra five minutes he could have come up with something better that isn’t the adult equivalent of yelling a dirty word from the back of your fifth grade science class.

Oh well. That’s the great thing about online streaming: there’s something for everyone to watch. If you’re the target audience for Jack and Jill and can’t wait to see what Sandler does with the Wet Chicks, then more power to you. If not, then we’ll always have Galaxy Quest, which is set to arrive to Neftlix this month. At least the dirty jokes in that movie are actually funny.