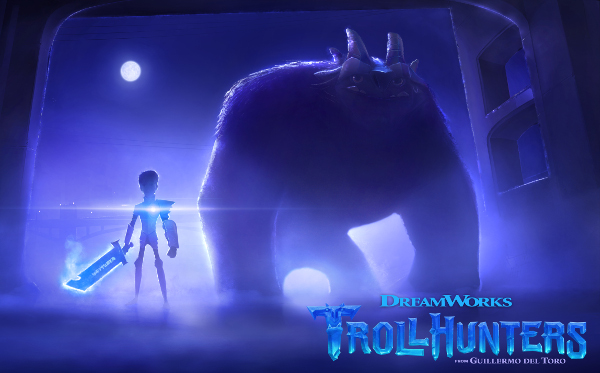 We’ve been keeping an eye on Guillermo del Toro’s upcoming Netflix animated series, Trollhunters, which is being produced by Dreamworks Animation. Being called a “family event series,” del Toro announced a pretty stellar voice cast for the project earlier this morning at the Annecy Animation Festival in France.

Based on a book for young readers also written by del Toro, Trollhunters tells the story of a boy named Jim and his two best friends who discover that there’s a hidden battle between good trolls and bad trolls beneath their hometown. Anton Yelchin, whom you may know as Chekov 2.0 from the recent crop of Star Trek films, will play Jim who,  according to Deadline Hollywood, “is an ordinary teenage boy whose discovery of a mystical amulet sets his life on a course filled with high-stakes adventure.”

Joining Yelchin are Kelsey Grammer (‘sup, Frasier!) and Ron Perlman (‘sup, Hellboy!). Grammer will be playing Blinky, one of the “good trolls” who befriends Jim. Perlman will be voicing Bular, one of the “bad trolls” who targets Jim and his friends.

Trollhunters will be executive produced by del Toro, along with Marc Guggenheim (Arrow, Legends of Tomorrow) and Christina Steinberg (Rise of the Guardians, National Treasure). Rounding out the writing team are Dan Hageman and Kevin Hageman (The Lego Movie) as co-executive producers, and Chad Hammes (Dragons: Race to the Edge) is set as producer.

Trollhunters is set to drop in December! Will you be watching?