Script to Neil Gaiman’s New Doctor Who Episode Gets Left in the Back of a Cab; Rescued by Good Samaritans 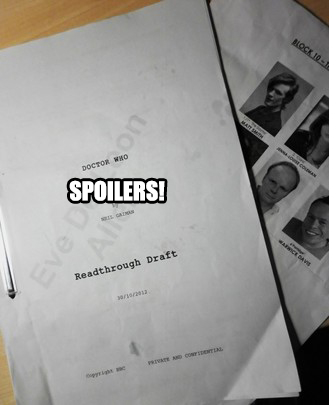 Editor’s Note: The preceding sentence was based on erroneous information. The script was accidentally left in a taxi by an actress working on the show.

(Which, by the way, we now know is titled The Last Cyberman.)

A picture of the script was posted on Facebook; it was found by a woman who doesn’t watch Doctor Who and says she hasn’t read the script. A friend of hers who goes by the Reddit handle Shrimpdude posted the pic to Reddit, where he and several others tried to figure out how to get it back to the BBC.

“Been in touch with various members of the production team (Nerdgasm) and we’ve arranged a return of the script. Thank you everyone that upvoted this post so it got the attention of the BBC. This thread has made my life – I never would have believed I could help out the Doctor Who production team!”

This whole story brings to mind two questions. The first one’s directed to the Doctor Who fans: If you had found this script in the back of a cab, would you have read it?

And, more importantly: When will someone create a Twitter account for the script? @NeilHimselfsHAT (which is still active, by the way) popped up fairly early in the Hat Abandonment Saga; I’m surprised no one’s jumped on this yet. They can be best friends!