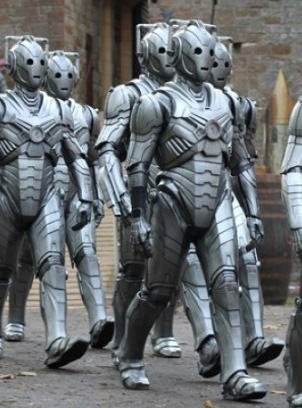 “I can tell you that there are Cybermen in it. It will be a stand-alone episode, I don’t know if it will be number twelve or thirteen. It will be the series’ penultimate episode. But it has a beginning, a middle and an end… Steven [Moffat] wrote to me and asked if I wanted to make the Cybermen scary again. I thought back to myself at the age of six or seven, The Moonbase, Tomb of the Cybermen… I saw them when they were first broadcast. The Cybermen were much scarier than the Daleks, because they didn’t make any noise. The Daleks moved around all over the place shouting “Exterminate”, etc. With the Cybermen, it’s different. You turn around and bam! There they are. It’s scary. I told him that I was going to take the Cybermen from the sixties […] and see what I could do. I don’t know if it’s going to work, we’ll see.” – Writer Neil Gaiman saying as much as he’s willing to say about his upcoming Doctor Who episode.