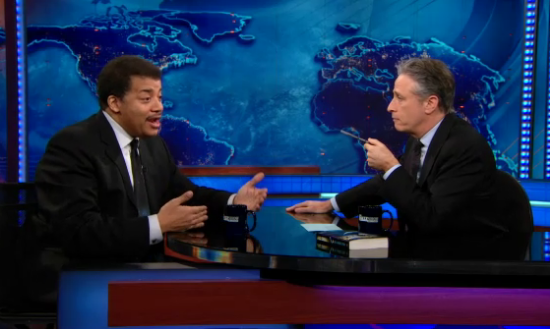 The opening sequence to The Daily Show features a series of spinning globes, but there’s a problem — the globes in the opening are spinning the wrong way. Astrophysicist Neil deGrasse Tyson called them on that fact, so for his appearance on the show the other night, the graphics department “fixed” the opening of the show.

Take a look at the new, Neil deGrasse Tyson approved opening to The Daily Show:

Tyson is a frequent guest on The Daily Show, and that’s just fine with us because he’s one of the most interesting people out there. He was there to promote the paperback of his book Space Chronicles. During the interview, Stewart and Tyson talked primarily about asteroids, and how they will destroy us all unless Tyson gets funding for a gravitational tractor beam.

The interview spilled past the short time they had on the show, so there are two additional segments online. Tyson seemed thrilled to be included in an extended interview, which he says is usually reserved for heads of state, but it’s something The Daily Show seems to be doing a lot more of lately. Here’s part two of the interview:

Part three of the interview has some language that would have been censored had it aired on the normal show, but made it’s way on to the Internet. It comes right after Tyson explains how the shock wave from the Russian meteor caught people off guard, when Stewart says, “I fucking love science.”

Stewart said in the Interview that he loves talking to Tyson and would have him on throughout a whole episode. We support that. Maybe he can guest host an episode while Stewart is on break directing his movie.

(via The Daily Show)