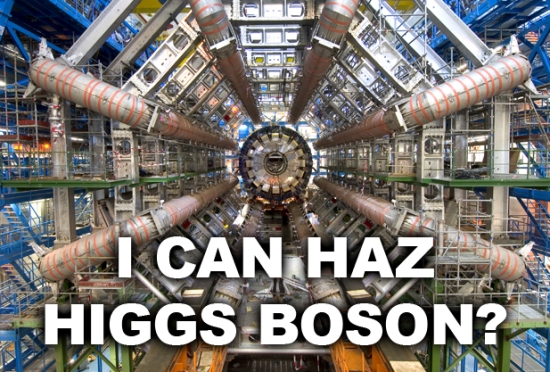 The particle discovered last year is largely believed to be the Higgs boson, but it seems like nobody wants to be the one to officially name it that for fear of being wrong, but this week physicists presented new evidence at the Rencontres de Moriond derived from data taken from the ATLAS and CMS collaborations at CERN that said the new particle discovered looks more like the Higgs boson than it did before, and they’re one step closer to calling it.

The data was presented in a series of lectures at Rencontres de Moriond in La Thuile, Italy yesterday, and it is outlined in detail on the Quantum Diaries site. Since I’m not a particle physicist, and neither are you probably, I’ll try to keep this general.

CERN Research Director Sergio Bertolucci said, “Until we can confidently tie down the particle’s spin, the particle will remain Higgs-like. Only when we know that it has spin-zero will be able to call it a Higgs.”

The more we look at it, the more the particle discovered last summer at #CERN looks like a #Higgs boson quantumdiaries.org/2013/03/06/lat…

That’s hardly saying the new particle is the Higgs, but it looks like they’re getting closer. The link in the tweet is to the detailed write up on Quantum Diaries, which also talks about measuring the new particle’s decay, and how it is created. It goes into very specific detail, but if you know what W and Z ou photons are, give it a read.

The hesitation to call the new particle the Higgs has been around since the particle was discovered, but it’s understandable. Being the first scientist to say the Higgs boson has been discovered would be good, but being the first scientist to prove the Higgs boson has been discovered is better, and that’s really what good science is all about. Although no one’s willing to officially call it yet, some scientists do believe the new particle is the Higgs, and that it’s just a matter of parsing out the data to prove it beyond any doubt.

Here’s CERN physicist and NYU professor Kyle Cranmer talking to Neil deGrasse Tyson and Bill Nye on Tyson’s show Star Talk Radio last November, basically admitting that the new particle is the Higgs and explaining why everyone is so afraid to say it. That important bit’s a little after 10 minutes in, but the whole thing’s great:

The new particle discovery is fascinating, and could have huge implications for the Standard Model of particle physics, regardless of whether or not it’s the Higgs. The particle being the Higgs would complete the Standard Model, but if it’s something else, science might have to rethink that model altogether. Although so far all the data points to particle being the Higgs boson, it could be years before enough data is gathered and analyzed to prove it.

(via CERN, image via willc2)