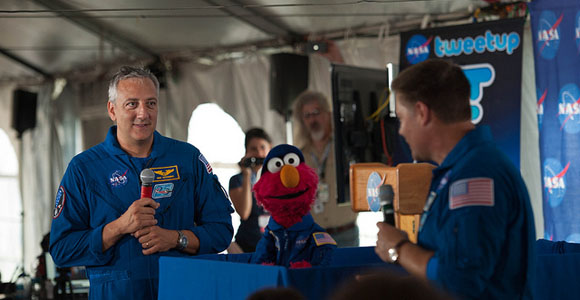 Look at our little NASA, all grown up. Now they’re tweeting regularly and winning awards for it! A Shorty Award for best governmental use of social media to be exact.

The awards were announced this past Monday. If you aren’t familiar, for the last four years, the Shorty Awards have applauded the best uses of social media whether on Twitter, Facebook, Tumblr, Foursquare, or YouTube. Conan O’Brien, Sesame Street’s Grover, Suze Orman, Neil Patrick Harris are all winners but the awards go to more than just celebrities or individuals.

“The nomination for NASA’s official Twitter account, @NASA, cited the space agency’s efforts to get people — especially kids — interested in science,” according to Space.com. “The award is NASA’s third Shorty overall. The space agency won one in 2009 for its use of Twitter during the Mars Phoenix Lander mission, which found water ice just beneath the dirt near the Red Planet’s north pole. Further, astronaut Doug Wheelock won the Real Time Photo of the Year Shorty in 2011 for his ‘Moon from Space’ snapshot.”

NASA has over two million followers (and counting) on Twitter and often hold “Tweetups” where users can attend events alongside engineers, scientists and astronauts.

“The Obama administration has placed a high priority on openness and on-line communications, and @NASA is honored to be recognized for its social media efforts with a Shorty Award,” David Weaver, NASA’s associate administrator for communications, said in a statement. “We are inspired by the social media community and their passion for sharing our compelling story of reaching for new heights and keeping America the world leader in space exploration.”

Also, we must point this out. The Hubble Telescope congratulated NASA on the award. 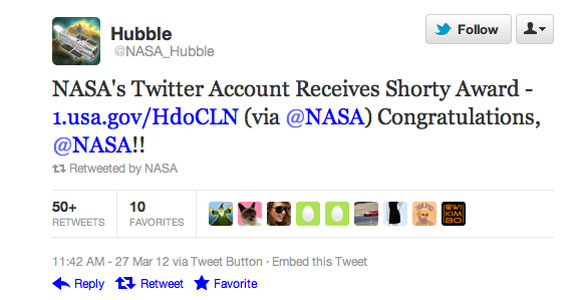 AWWW! Hubble is such a great buddy.