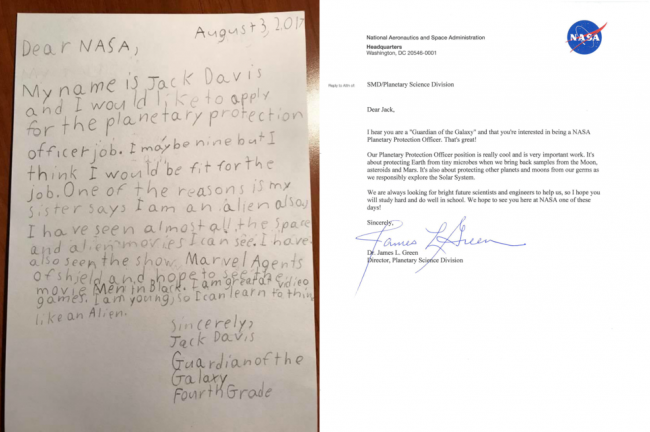 NASA’s recent job-opening of “Planetary Protection Officer” went viral last week for its science fiction-esque title. While the actual job has been around since the 1960s and is less guns and lasers and more preventing contamination, the title drew the attention and curiosity of many, including New Jersey fourth grader Jack Davis.

Davis, as any potential job applicant does, wrote a cover letter detailing his interests and qualifications for the role.  “I may be nine but I think I would be fit for the job,” Davis writes. “One of the reasons is my sister says I am an alien also, I have seen almost all the space and alien movies I can see.” The student elaborates, “I have also seen the show Marvel Agents of Shield and hope to see the movie Men in Black. I am great at video games. I am young, so I can learn to think like an Alien.”

What an excellent cover letter! Davis acknowledges something that might be seen as a shortcoming (his age) and turns it into a positive. He clearly articulates his interest in the position, and shows past experience with the topic with several concrete examples. NASA’s Planetary Science Director Jim Green took notice, and while he didn’t offer Davis the job (yet), he did offer some encouraging words.

“Our Planetary Protection Officer position is really cool and is very important work. It’s about protecting Earth from tiny microbes when we bring back samples from the Moon, asteroids and Mars,” Green writes, “We are always looking for bright future scientists and engineers to help us, so I hope you will study hard and do well in school. We hope to see you here at NASA one of these days!” Davis also received a call from Green.

In a statement from NASA, Green talks about taking these opportunities to get kids excited about science and possible futures in exploration. He says, “At NASA, we love to teach kids about space and inspire them to be the next generation of explorers. Think of it as a gravity assist — a boost that may positively and forever change a person’s course in life, and our footprint in the universe.”

It’s always exciting to see how media can foster an interest in scientific careers, and it’s always a delight to see groups like NASA encourage young ones.