NASA Scientists Get All The Cool Toys, Including This Hydrothermal Ocean Vent Simulator 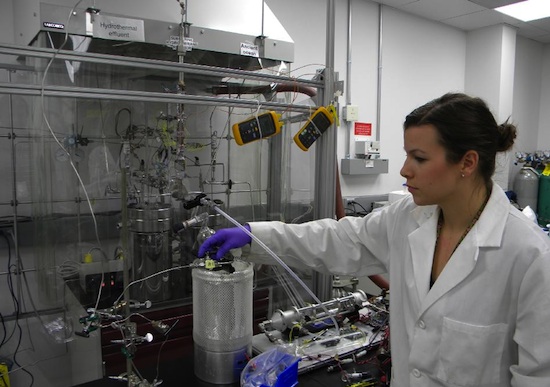 We’re not going to lie — sometimes, it occurs to us that we only ever wanted to be scientists because of all the neat toys they get to play with. That probably has something to do with why we didn’t end up becoming scientists. Well, that and our inability to perform any but the most basic mathematical operations. We do still want to play with researcher’s toys, though — especially things like this gizmo at NASA’s Jet Propulsion Laboratory (JPL) that simulates the hot, high-pressure conditions found in undersea hydrothermal vents in an effort to find out if those vents could have acted as incubators for the amino acids that many think were the first crude steps toward life on Earth.

Researchers are pumping two liquids — a solution of carbon dioxide in briny water that probably tastes like the worst soda you’ve ever had and another solution of water and sodium hydroxide — through a sample of volcanic rock that simulates the ocean floor of a young Earth in the hopes of learning whether this sort of action can produce organic molecules like ethane or methane, or even amino acid compounds. The thought is that these compounds could have been the first shuddering steps toward more complicated structures like RNA and DNA, making hydrothermal vents a sort of cradle for the first forms of life to emerge on the planet.

Though it may seem unexpected to find NASA researching conditions at the bottom of the ocean when their purview is traditionally more space-centric, it makes sense when you think of the nature of the questions researchers are working to address here. The NASA/JPL team is hoping that the vent simulator can teach them more about the origins of life here on Earth, which they hope will offer them further clues to how life might develop on other planets, from Mars to icy moons like Titan. Isik Kanik, who heads the Icy Worlds program where the simulator is used, says:

“If this ocean experiment is successful, scientists would have a better handle on where to look for the building blocks of life on Earth and beyond, and what signatures we should be looking for of life and of habitable environments in the solar system.”

With that much heat and pressure, though, we’re also betting this thing could brew one mean espresso. Not that anyone would ever use it for such an irresponsible and clearly awesome purpose. We’re just saying, is all.

(via NASA, image courtesy of JPL)