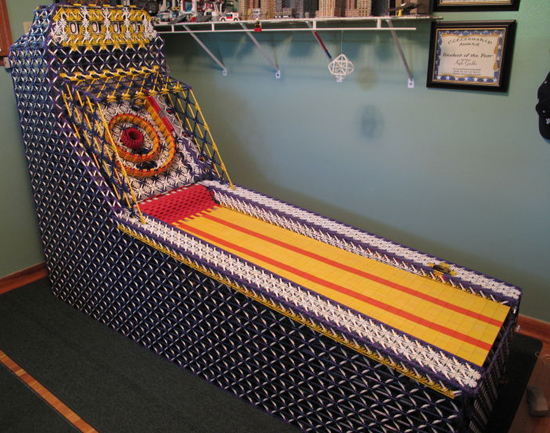 For a number of people, K’Nex is that construction toy made up of plastic widgets and gears that they ignored during their childhood to instead focus on LEGO castles and the like. Instructables user Shadowman39 shows all of these good folks that perhaps they chose wrong with his full-size skeeball machine made out of those widgets and gears. It has everything one could ever want out of a skeeball machine, and is even coin-operated.

The fun doesn’t stop there. The colorful device keeps track of score as well, performing all the addition it needs to function flawlessly. He’s even supposedly scored in the tiny 1,000 point holes twice. The video has a shot of a ball going into one of these, but it was almost certainly staged. We’re going to need more substantial proof if Shadowman39 is going to claim such an impressive feat. Even if he’s fibbing about the score, though, the construction project is nothing short of fascinating. Check out his video that pulls away the covering to get a better look at this beast’s insides:

On his Instructables page, Shadowman39 also says that everything in the machine is purely mechanical. Other than a couple rubber bands and the paper in the counter, every piece is straight up K’Nex. Bravo.