NASA Discovers First Earth-Sized Planets Out of Our Solar System, Unfortunately Not in Habitable Zone 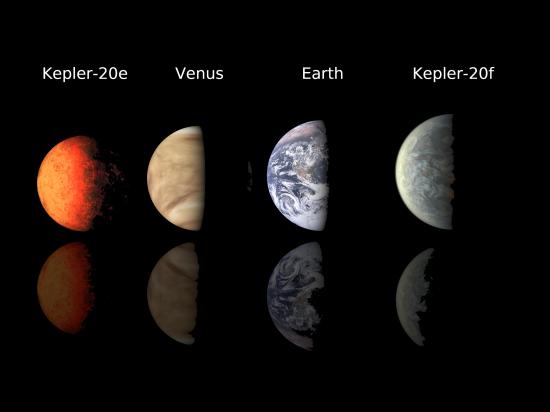 NASA’s Kepler has found the first earth-sized planets orbiting a star outside of our solar system. Unfortunately for extraterrestrial life enthusiasts, the planets are too close to the star, so they are not in the star’s habitable zone. Dubbed Kepler-20e and Kepler-20f, the planets are in located a distance from the star that liquid water could not exist on their respective surfaces, however, the planets set a record for being the smallest exoplanets found orbiting a star similar to our sun.

The planets are thought to be rocky in terrain, which certainly is more promising than a gas planet in our search for other habitable worlds. Kepler-20e is slightly smaller than Venus, measuring in at 0.87 the radius of Earth, while Kepler-20f is actually a bit larger than Earth, 1.03 times Earth’s radius.

The Kepler-20 system also has three other planets that squeeze into the size range or larger than Earth, but smaller than Neptune, with each planet in the system orbiting within a comparable distance between our sun and Mercury’s.

Scientists do not know how the Kepler-20 planets arrived at their current location, but they do not think they evolved in those spots naturally. Personally, I think the aliens from the end of Men in Black just shot the planets there like marbles.

So, NASA is making progress in the search for habitable planets, and we’ll likely find some in the not-too-distant future — but the question is whether or not they will be located in a not-too-distant distance.