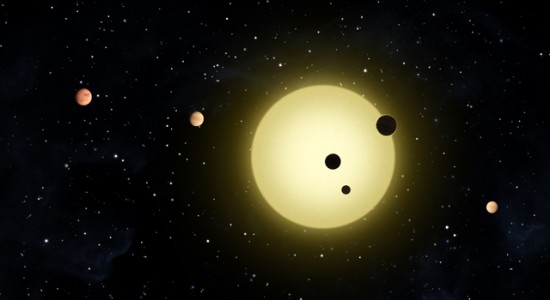 NASA‘s Kepler spacecraft has uncovered the largest known collection of Earth-like planets orbiting a star similar to the Sun outside of our own solar system. The star, named in true astronomer fashion as Kepler-11, is located a brisk 2,000 light years away and contains six tightly-packed planets, five of which are located in the “habitable zone” — a region where liquid water (and undoubtedly aliens) could exist.

“In one generation we have gone from extraterrestrial planets being a mainstay of science fiction, to the present, where Kepler has helped turn science fiction into today’s reality. These discoveries underscore the importance of NASA’s science missions, which consistently increase understanding of our place in the cosmos.”

Kepler is able to determine the mass and distance of a planet by observing minute changes in brightness as it passes across a star. To verify that a planet candidate is up to the task of being a bona fide planet, Kepler must observe three full transits. If a planet is similar to Earth, it will therefore take three years to confirm its status. The planets hovering around Kepler-11 have a much quicker orbital period, ranging from 10 to 47 days, (except for the asocial Kepler-11g, which takes a leisurely 118 days to orbit) so their elite status has been confirmed.

NASA’s Deep Field image uncovered roughly one gazillion new galaxies by focusing on a seemingly insignificant point in space. Similarly, Kepler’s field of view only covers one four-hundredths of the sky — and its discoveries only accounts for objects that reside inside the Milky Way. Over 1,200 planet candidates have been found to date by Kepler, including a total of 59 candidates located in a habitable zone (up from a paltry zero just two years ago).

NASA plans to validate the existence of additional exoplanets using ground-based observatories down here on Terra, and will continue to use Kepler for future planet scouting missions.